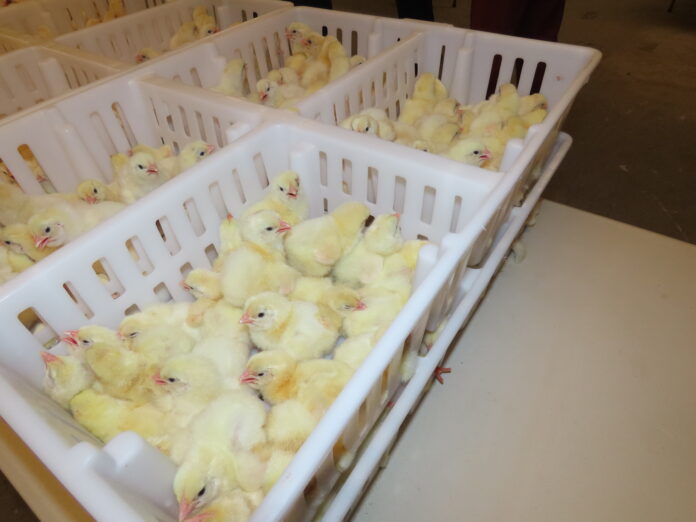 A breakthrough is underway in poultry production in Antigua and Barbuda and when fully implemented, it will make a significant impact on the importation of our most consumed meat product.

Minister of Agriculture, Hon Samantha Marshall, recently led a high-level team from the ministry on a visit to a major broiler farm project which is being pioneered by Mr. Alan Osborne of FNY Foods Ltd. ( branded as “Fresh ‘N Yummy” ), a local start-up poultry production company in Antigua and Barbuda.

The Minister and her team said that they were very impressed with this initiative. Their first stop was at the facility where they witnessed first-hand eggs hatching.

Minister Marshall said that this level of investment which will produce whole chicken and chicken parts right here in Antigua and Barbuda is very commendable as there has been much talk about this for decades.

Mr. Osborne who led the agriculture officials on a tour of the hatchery, said that his company is on a quest to make a significant dent in the importation of chicken into Antigua.

He explained that hatching eggs in Antigua reduces the cost of acquiring day-old chicks which is the second largest cost component, second only to the feed required for the birds.

“So we have a hatchery in which eggs brought in from Miami on a weekly basis are placed into incubators for 21 days after which they hatch. After hatching, we vaccinate them and place them onto farms.”

In explaining the process further, Osborne said that these chicks are raised on the farms for between 32 and 42 days after which they will then be taken to the slaughter house to be slaughtered.

Osborne said that they are currently installing a slaughter line that can slaughter up to 500 birds per hour, approximately 3,000 birds in a day.

He spoke of the economic impact of such an operation, especially from the jobs that will be created out of this industry, particularly at the slaughter house.

“Between hatching, feed distribution, chick distribution, raising the birds on the farms, movement of mature birds from the farms to the slaughter house, actual processing in the slaughter house and then ultimately,  delivery to retail outlets and supermarkets, it is projected that some 60 persons will be gainfully employed by the end of July this year. Slaughtering is set to begin in June.

Osborne is appealing to the public to support this brand’s locally produced poultry products which will live up to the company’s ‘Fresh ‘N Yummy’ brand name by being fresher and tastier than imported chicken.

“The ‘Fresh ‘N Yummy’ brand was chosen to capitalize on our strengths over the imported bird. For imported chickens, we have no idea how long ago it was slaughtered, how long it was in the freezer and how long it was defrosted.”

He added, “What we aim to provide to consumers is a bird that is slaughtered in Antigua on any given day, be in the supermarket that same day, and then purchased within three days without ever being frozen.”

One important aspect of this operation is that local farmers of Antigua and Barbuda are engaged through the “Contract Farmer” model.

Once the Birds are hatched, they are distributed to farmers all over Antigua. Feed is provided to the farmers so they do not have to inject their capital into purchasing feed or day old chicks. Farmers` only responsibility is providing a house (pen), labour, water and electricity to raise the birds. Contract Farmers are compensated by the weight produced.

The Minister’s tour included two stops at chicken houses in both Cassada Gardens and Paynters where two contract farmers/operators, Pastor Kelvin Pelle and Walter Lewis, spoke well of the operations at these locations.

The ‘church community project’ as Pastor Pelle calls it, will be able to provide employment for members at the Cassada Gardens Fellowship of Believers formerly called Bible Believers.

“So this is what we are doing here. We are trying to get young people involved, seeing another side of agriculture, not just dirty and its hard work, but it’s something that everyone can do and I think it’s rewarding when we know we are producing our own food.” 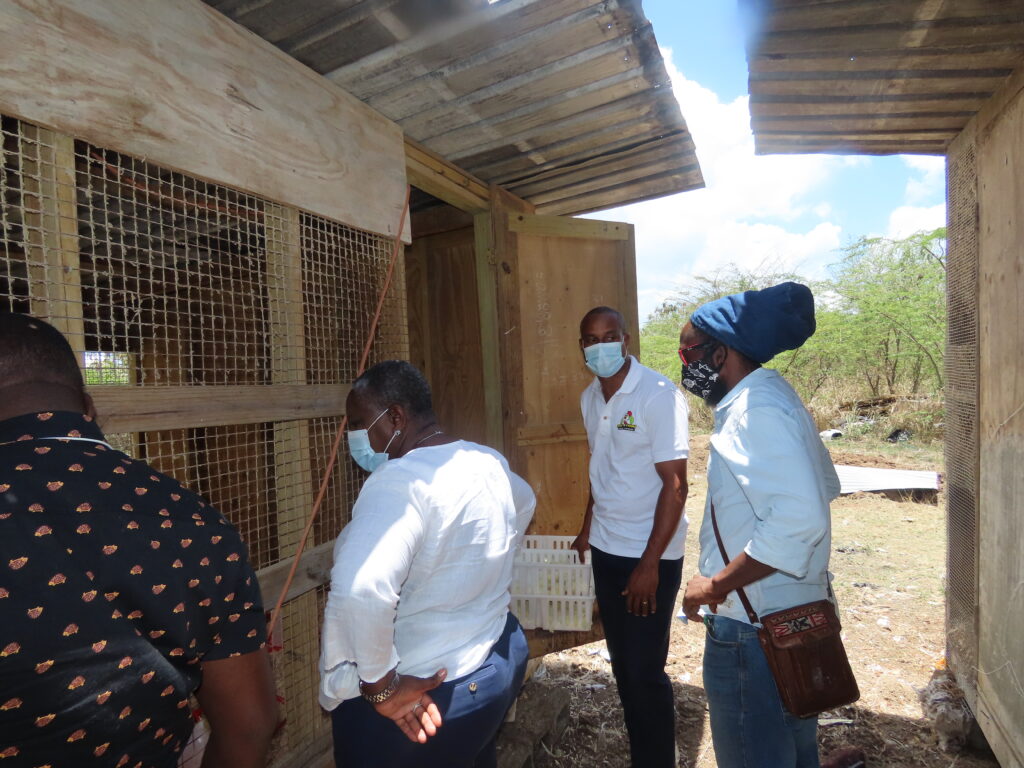 Apart from the brooding area, expansion work is being done at the Cassada Gardens location to expand the business which will have the capacity to hold 2,500 to 3,500 birds. Pastor Pelle has been teaching agricultural science for 40 years.

Meanwhile in Paynters, local farmer Walter Lewis who was the first farmer to commit as a contract farmer with the program, is housing over twelve hundred two-week old broiler chicks that were hatched in Antigua.

”We’ll grow them out to 35 to 42 days. They are pretty good, pretty comfortable, as long as they have ventilation, water and feed they should be ok.”

According to Minister Marshall, the importation of chicken in particular, has been quite high over the years and the fact that Antigua and Barbuda will actually be able to produce a significant portion locally is a major step towards us growing more of what we eat. She commended Mr. Osborne and his team for making this significant investment despite the challenges faced, and believes that there are greater things to come for this business.

According to Marshall, most people see agriculture in terms of crop production but looking at it from this level of a business venture producing chicken and chicken parts, is excellent. 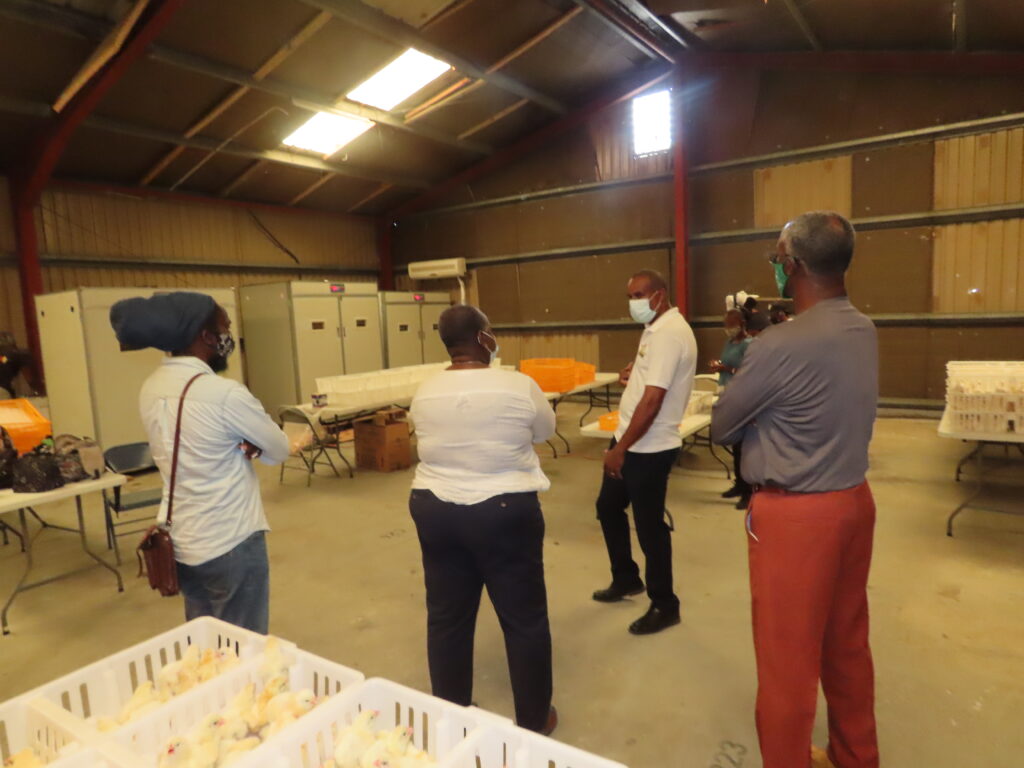 Permanent Secretary in the Ministry of Agriculture, Colin O’Keiffe lauded this initiative and thinks that this is a very exciting, locally driven project that will bring huge benefits.

He encouraged all Antiguans and Barbudans to support this venture in whatever way they can.

In the meantime, Bailey said that he was impressed with this particular project from the time he saw the business plan and interacted with Mr. Osborne.

The acting director of agriculture noted that this project is adding a well needed link to the supply chain of poultry in Antigua and Barbuda.

“As you know previously, we would have been importing all of our day-old chicks which come at a cost and also at a risk, so to me, this initiative has a two-fold effect – reducing the risk and also improving the business stature of the poultry industry.” 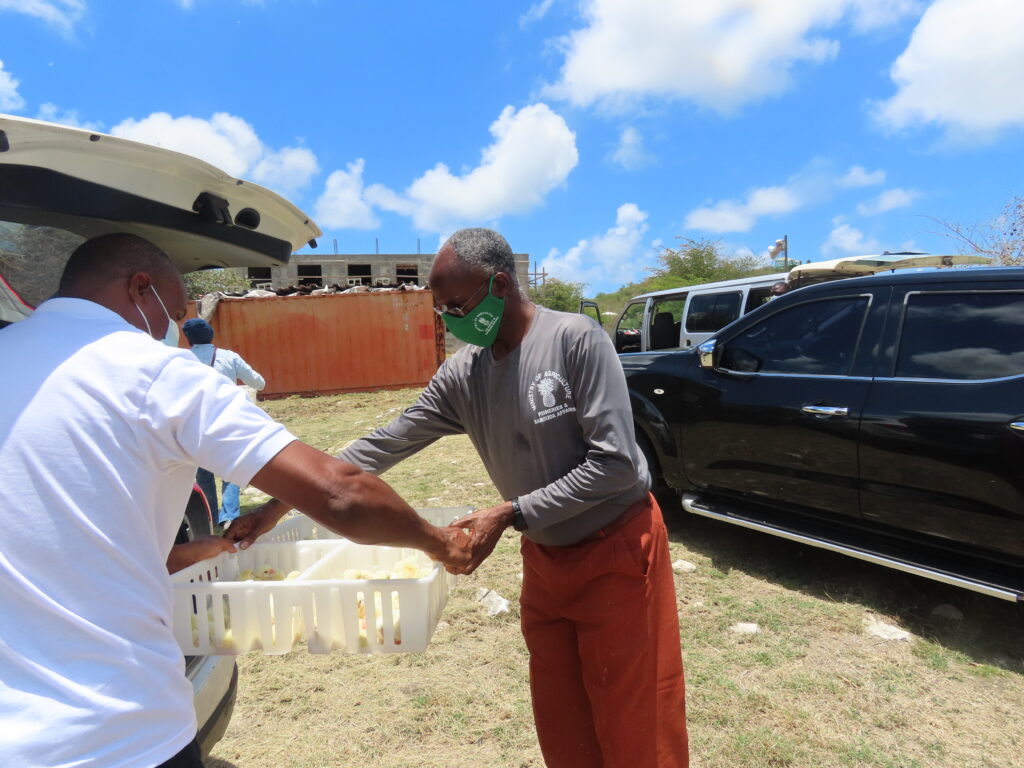 Young Shequina Sheppard works part-time with Mr. Osborne on hatch days to vaccinate the chicks and also volunteers with Pastor Pelle to set the brooding area where the chicks will stay for two weeks before they are transported to the bigger houses.

She was speaking to us while masterfully handling the chicks in the brooding area at the Cassada Gardens pen which is fitted out with starter feed, water and the ideal environment to keep the chicks warm.

‘Agriculture is something I really love to do” Shequina beamed, “I want to own my own farm in the veterinary field.”

So from the looks of things, the poultry industry is definitely on the up and up and  in our next feature, we will tell you about a big poultry development project coming soon at Betty’s Hope which holds great prospects for poultry farmers in Antigua and Barbuda.