The Antigua and Barbuda Olympic Committee (ABOC) joins with the rest of the other 205 countries in the world to celebrate World Olympic Day today.

Antigua and Barbuda will be represented by five young athletes along three different disciplines in this year’s 3rd Youth Olympic Games (YOG) to be held in Buenos Aires, Argentina in October of this year.

There are two definite locks for the YOG this year – world number one kite-boarder Tiger Tyson (sailing) and 15-year-old Llyeton Martin (swimming).

With only three possible spots per discipline allotted to Antigua Barbuda for these year’s games, this leaves officials in the Antigua and Barbuda Athletic Association (ABAA) with the difficult decision of choosing between five of their qualified athletes – Joella Lloyd, Soniya Jones, Dahlia Barnes, Barak Matthew and Taeco O’ggaro – to send to Argentina in four months.

Which three will go? The ABAA meets tomorrow to decide the fate of its young athletes as they all hope to make the cut for this year’s Youth Olympic Games.

Commenting on the dilemma, NOC general secretary Cliff Williams said that, “The United states, for instance, has a similar problem. Not everyone that qualifies can represent America in the games.”

“The (Athletic) Association will ultimately have to make that decision.” 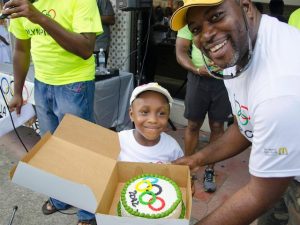 To commemorate Olympic Day, the NOC will be hosting a Run/Walk and Zumba session on Sunday 24 June at the North Stand of the Sir Vivian Richards Cricket Grounds at 3 pm sharp.

Invitations had been sent to all the sporting bodies on the island including all the schools as well.

“We normally have a good turnout, especially because of the time of the year when everybody is getting fit for Carnival.”

Last year’s turnout exceeded 600 persons and this year the gen sec expects to exceed that number.

The event will take place at the North Stand Compound of the Sir Vivian Richards Stadium. The event will start at 3pm with remarks President of the NOC, MP Chet Greene and a reading of the IOC President’s message by our selectees. 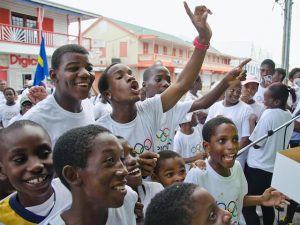 The route starts from the Sir Viv Richards Cricket Stadium and heads towards Parham back road. Then it turns up to Parham, makes the loop around the Parham town Market area, and then takes the participants into the village. The route then continues onto Crabbs Road then heads back to the Cricket Grounds where the activities will continue with a session of zumba exercise.

“This year marks the 70th Anniversary of Olympic Day under the theme ‘United by’ #unitedby. This year of the third edition of the Youth Olympic Games, Antigua and Barbuda can boast of an unprecedented number of qualified Youth Olympic Games’ athletes.”