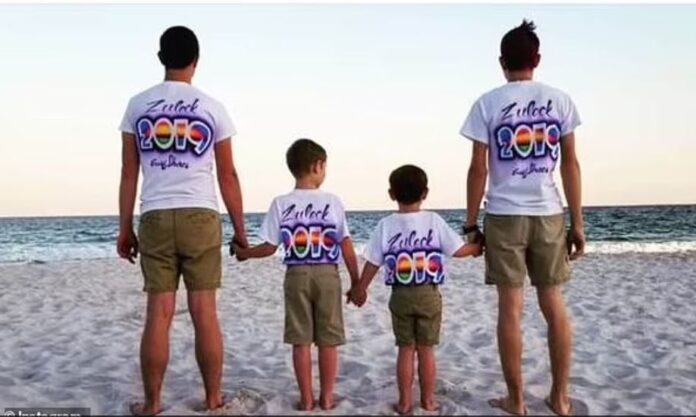 A wealthy gay couple from Atlanta who have been charged with sodomizing their adopted sons also pimped them out to other local men, disturbing new documents reveal.

Zachary Zulock and his husband William Dale Zulock Jr. were once the darlings of the LGBTQ scene in Georgia.

In August, the pair admitted a range of heinous sexual crimes, including rape and forcing their young sons to perform oral sex on them, after a midnight raid on their home, during which one of adults was hauled naked from the house.

Now, thanks to an investigation by Townhall, it has emerged that not only did the sick pair abuse the boys – they also stand accused of offering them up to other local men too.

Hunter Clay Lawless, 27, and Luis Armando Vizcarro-Sanchez, 25, were taken into custody on charges of soliciting an act of prostitution with both boys in August, but their names are only now being made public.

It’s unclear whether they ever met the boys or had any sexual interactions with them, but Lawless told police he was invited to the home ‘multiple times’ by Zachary Zulock, after meeting him through a friend on Grindr.

Lawless told police Zulock contacted him through Snapchat, telling him he planned to ‘f**k his son’ that night, and warning him to expect videos of it.

Cops found photos and videos of Zachary Zulock raping the boy on Lawless’ phone and computer, according to the arrest documents.

In one message, Zachary allegedly said: ‘I’m going to f*ck my son tonight. Stand by.’

Vizcarro-Sanchez, the other local man, is also facing a string of unrelated child sex crimes.

Lawless lives with his mother and was shockingly released on a $25,000 bond after his August arrest.

Vizcarro-Sanchez is in custody on a range of charges. He is obsessed with anime and gaming, according to social media profiles, and stands accused of trying to coerce a 13-year-old relative into sex.

It remains unclear what led police to the Zulocks, but a family member spoke to Town Hall about them at length. That relative said they had concerns about the company the pair kept, especially around the boys.

Before their August arrest, the pair lived a comfortable live in Atlanta thanks to Zachary’s bank work.

They also told relatives how they were given money by the state to pay for the children. The pair remain in custody awaiting their next court date.