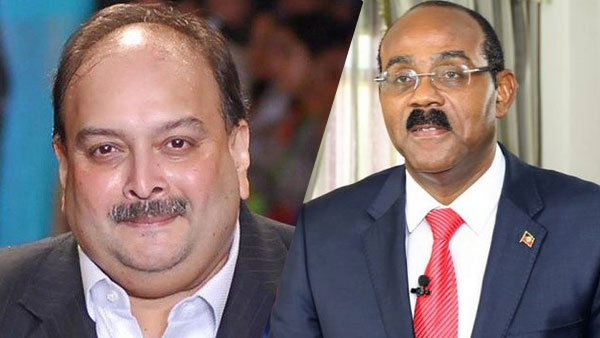 DNO:The twin-island nation of Antigua and Barbuda had no role to play in the alleged abduction of Indian Diamond Tycoon Mehul Choksi. CLICK HERE TO JOIN OUR WHATSAPP GROUP.

That’s the word from that country’s prime minister, Gaston Browne, who told parliamentarians Tuesday that his government has nothing to hide.

Spokespersons for Choksi accused the governments of India, Antigua and Barbuda, and Dominica of playing a role in the alleged abduction which involved multiple operators and high-speed boats.

“It is true that I would have stated publicly that our preference would have been for him to be repatriated directly to India from Dominica, but that was on the basis that he skipped the island. At that time, we had no information or the slightest speculation that he may have been abducted,” Browne said.

Furthermore, Browne said if the Indian government needed the help of Antigua and Barbuda in that regard, there would not be the need for a third party to get Choksi out of the country.

“There is no way that we would have been involved in any decision or any attempt to have him removed from the state illegally. If he wasn’t a citizen, he would have been made a persona non grata and you would be assured that before law enforcement would have gone for him, there would have been a plane on the tarmac to take him back to India,” he said

Choksi was taken into custody in Dominica, in May last year after he went missing from Antigua and Barbuda, where he claimed he was kidnapped and beaten in the process

He was charged for illegal entry into Dominica, however, the charges were dropped recently, following a detailed police report from Antigua and Barbuda, which Browne said still has not been shared with the AG or any member of his cabinet.

“This is a matter before law enforcement which will end up in court. The less said, the better,” Browne said

Furthermore, he recalled, that when “Choksi was first reported missing, “the concern of myself is that we would have been accused of facilitating his escape, so we got on to the police and asked them to issue a missing person notice to Interpol…”.

Choksi is an Indian businessman and the owner of Gitanjali Group, a retail jewelry firm with 4,000 stores in India.

Choksi is currently residing in Antigua and Barbuda where he holds citizenship.

Choksi, along with his nephew Nirav Modi, is wanted by Indian authorities in the Punjab National Bank (PNB) scam where it is alleged that the duo defrauded the bank of more than two billion dollars

An arrest warrant has been issued against Choksi and he is wanted in India for criminal conspiracy, criminal breach of trust, cheating and dishonesty including delivery of property, corruption, and money laundering. — DNO