Venezuela’s Ambassador to Guyana  has called on the government of Guyana and other governments across the region  to intervene as Venezuela’s political crisis deepens with daily clashes between demonstrators and security forces.

Ambassador Reina Diaz during a press conference here on Monday  urged the people of  Guyana and the Guyana Government to support the Nicholas Maduro Government in its call for peaceful dialogue to end ongoing political problems in the neighboring country.

Diaz also appealed for help from other regional governments while stating that the acts of violence can be attributed to “radical sectors of the political opposition”.

The Ambassador said the supposed peaceful demonstrations have a clear objective which is to overthrow the legitimate and constitutional President of Venezuela and reverse social achievements of Venezuelan people.
According to Diaz,  an international media campaign is underway to falsify the reality of what was taking place in Venezuela while refusing to report on the attacks on citizens and law enforcement.

“The Opposition funded by foreign aid and with media support have created matrix of hatred, persecution and aggression towards government officials and to all those who sympathize with the Bolivarian thinking.”

The call for help follows a meeting of Caribbean Community (CARICOM) fForeign Ministers in Barbados last week, during which they called for non-interference in the internal affairs of Venezuela .

In the statement issued the foreign ministers “decried the violence taking place and deplored the resulting loss of life and property”. 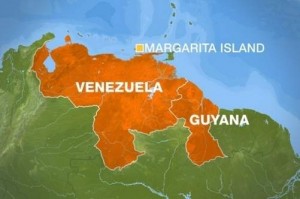 The statement issued at the end of the 20th Meeting of the Council for Foreign and Community Relations (COFCOR), the foreign ministers said that they were “united in their view”  that respect for these values and principles in addressing international situations of concern “would prove valuable and pertinent in addressing concerns over the situation in Venezuela.

“Persuaded that the solution to the present situation had to be sought internally, supported by a mediated process, they were of the view that the deeply entrenched positions needed to be softened so that trust could be built on both sides in order to facilitate dialogue so that the people of Venezuela could peacefully overcome their crisis,” the statement noted.

It said that the ministers also”decried the violence taking place and deplored the resulting loss of life and property”.

Last Thursday, the United States government said it would be imposing sanctions on members of Venezuela’s Supreme Court following a series of rulings that Washington said had usurped power from the nation’s opposition-controlled congress and sparked a deadly wave of unrest.

The U.S. Department of Treasury said it was freezing the assets of eight Venezuelan government officials on the Supreme Court in an effort to support the Venezuelan people “in their efforts to protect and advance democratic governance.”

A ruling issued in late March that stripped Venezuela’s congress of its last powers was later reversed amid a storm of international criticism. But near-daily anti-government protests were triggered by the ruling and have continued across the country, with more than 40 people killed.