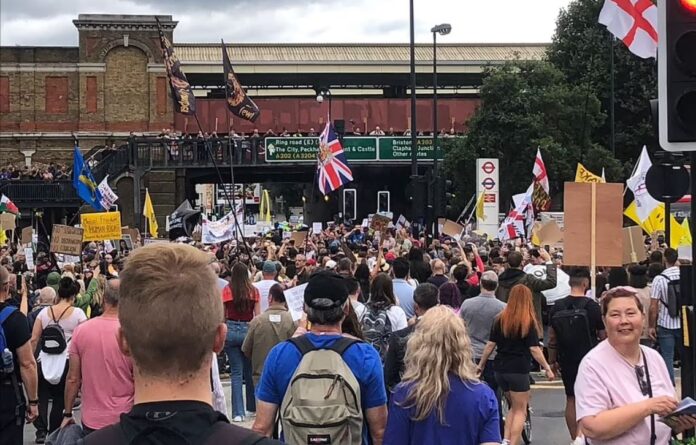 Thousands of anti-vaxxers have taken to the streets of central London in protest as they continue their campaign against mandated vaccines and Covid passports.

Demonstrators purportedly from The Save Our Rights UK group, armed with St George’s flags, placards, banners and megaphones, spent the afternoon marching through the capital.

The collective had previously promoted the ‘medical freedom march’, which would be ‘standing against mandated vaccines and vaccine passports, as the large crowd, understood to be in the thousands, gathering in Hyde Park.

Pictures and video shared online showed the large group, understood to be in the thousands, progressing past Vauxhall Bridge.

Police are monitoring the crowd, as eyewitnesses report at least four riot vans rushed over to the scene.

The demonstrations mark part of a coordinated worldwide protest, seen also in cities in Italy and France, at governments’ decisions to impose mandatory vaccinations for some members of society.

The large group started amassing in central London earlier this afternoon, in what is reportedly part of an organised effort matched in other cities in Europe against vaccine passports. 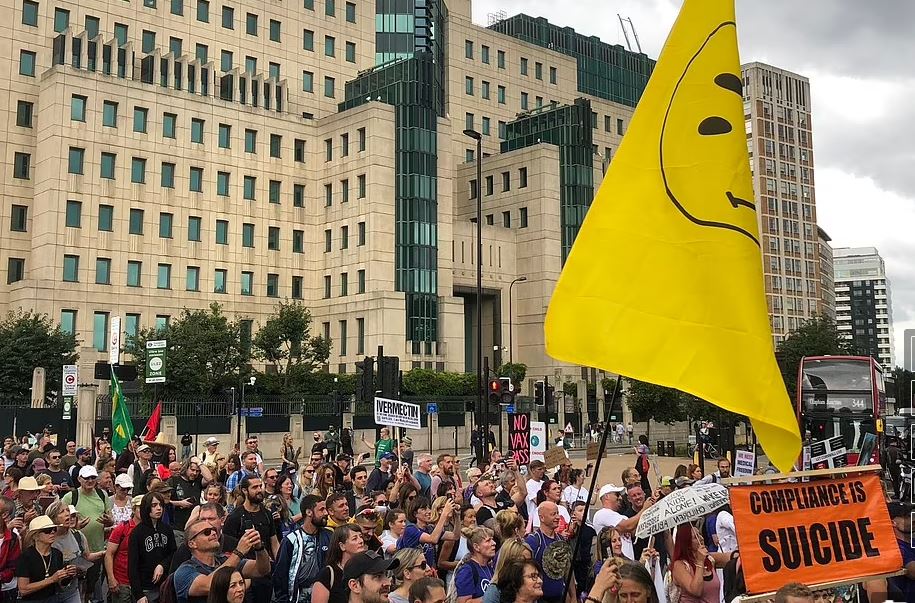 The topic has caused issues in Boris Johnson’s government, with him facing a Cabinet revolt and being accused of denying people their fundamental freedoms.

Pictures from the scene show crowds armed with placards bearing slogans including ‘my body my choice’ and ‘hands off our children’ as they made their way through the capital on Saturday.

A number of parents brought their children along with them to show their support, as Union Jacks and St George’s flags waved in the background.

The throng of people are expected to head to Westminster to voice their concerns outside the Houses of Parliament today.

People could be seen carrying placards and banners saying ‘no medical dictatorship’ and ‘no vaccine passports’, while smoke flares appeared to have been released in one place.

The Metropolitan Police warned of disruption to traffic and bus services as roads became blocked.

The force said crowds moved on to Victoria, on to Vauxhall Bridge Road, and through to Kennington. It is understood protesters are heading towards Clapham Common.

Police advised people to avoid the area at the junction of Brixton Road and Acre Lane in the south of the capital, before confirming it had been cleared for traffic.