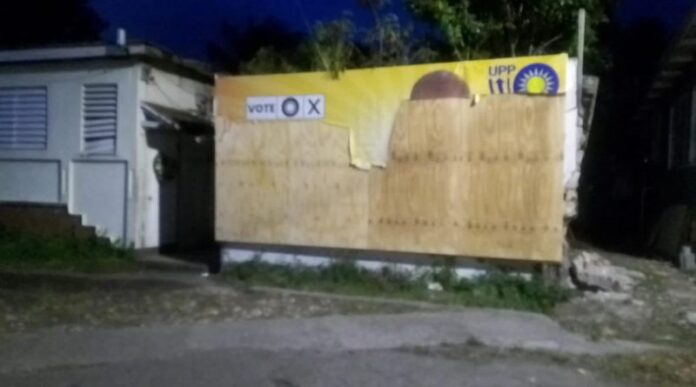 The vandalism of billboards continues, with Alister Thomas, the United Progressive Party (UPP) Candidate for St. John’s City West, being the victim of this malicious act for a second time in several months.

Reports say that some political operatives vandalized Thomas’ billboard, located on lower Newgate Street in the vicinity of the Barnes Funeral Home, by tearing off the poster with his image.

However, this will in no way deter the UPP Candidate, who sees this move as an act of desperation on the part of his political opponents.

Thomas says this type of vandalism represents failure – an admission that the people of the constituency have been failed, let down, abused, disrespected – and this act of vandalism is just a continuation of that.

He says that he and the UPP — led by Political Leader Harold Lovell — are a bastion of hope and relief in a community that has been rejected by the incumbent, Prime Minister Gaston Browne.

Thomas says that Point and Villa, in the past, were the capital of economic commerce and trade, as well as a community that gave a great deal to this country in terms of culture and art.

Meanwhile, Thomas says that Browne has a morbid fear of losing the election and his seat;  therefore, he is not surprised that vandalism has now become a part of the campaign.

The UPP Candidate says that everyone should be concerned about their safety during this election cycle since there is a set of people willing to do anything to hold onto power in this country.

He says that he and his team — and the Party, by extension — are focused and confident that, with the programmes they have developed and their history of being a party that delivers, the people will elect them into public office.

Thomas says it is a very expensive venture to erect these billboards – from the cost of the building materials to the posters and actually putting them in place.

Accordingly, he says that discussions will be held with his team on whether they will be replacing the torn-down poster.

Thomas experienced a similar case of vandalism last year with a smaller billboard located next to the Villa Primary School.

In that instance, a cream-coloured paint was used to splash his face.

That billboard remains in place with the paint still on it.

Meanwhile, Jamale Pringle, the UPP Candidate for All Saints East and St.  Luke, continues to deal with the vandalism of his posters,  reportedly by persons working with his Labour Party opponent.

On Wednesday, January 5, pictures surfaced that showed posters of James placed over those of Pringle, which were already affixed to a light post.

There was also red plastic wrapped around a post, covering other UPP paraphernalia.

This reportedly occurred in Old Road.

In December last year (2022), there was a similar incident.

However, the young men doing it were stopped by villagers who caught them in the act.

Neither James nor any member of the Labour Party has come out in condemnation of these incidents.

In the meantime, the ALP candidate for St. John’s City East, Melford Nicholas, has made a report to the Police about the vandalism of a billboard that reportedly was cut multiple times, and posters and banners that  reportedly were dislodged from their original places.

This reportedly occurred on Dickenson Bay Street in the vicinity of the Princess Margaret School (PMS), and the Police have launched investigations into the matter.