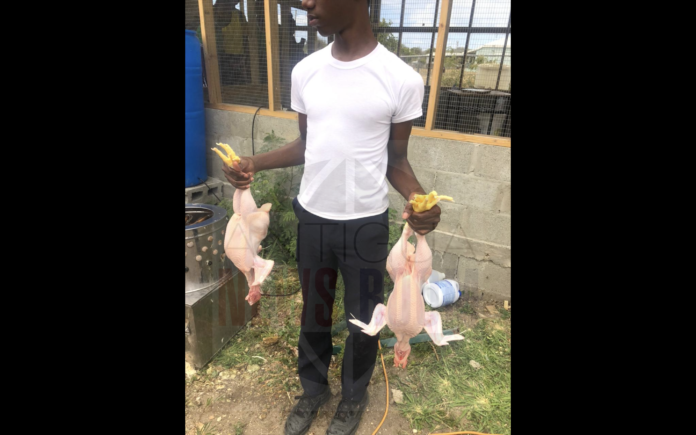 Traditional Learning experience is accepted by most but to others can be boring.

Education like the era we live in has evolved and continues to do so.  Many subjects taught at schools are redesigned and restructured to optimize retention of information, motivate and mold students for their future.

The atmosphere was permeating with excitement as the Agriscience seven fifth form students (three females and four males) under the supervision of their teachers Ms. Elise Phillip, Mrs. Kandia Lee-Williams along with instructors Mr. Kelvin Pelle and Miss June Douglas were busy preparing the birds for slaughter.

Additionally, students from first and second forms, farm attendants, the principal – Mrs. Bradshaw and other teachers were in attendance for this maiden event.

Twenty-five 7 weeks old chickens with an average weight of 5.5 lbs. were the centre of attention.  According to Ms. Phillip the birds were divided into two groups, some were placed in the “Control” area while the others were in the “Treatment” area.  “We had two sections that was the experiment they were doing, the Control section was not given the correct footage per square foot per bird, so they were given a smaller area to see if they did not have enough room to move about, they would have gained more weight in comparison to those in the treatment section Which were given the ideal footage”, said Phillip.

The birds were then observed and compared for their growth under these conditions.  However, the outcome was very surprising. “We had a flip, instead of the ones in the Controlled section where they had less room gain more weight it was like reverse phycology, the ones with the more space in terms of the Treatment section those birds had on more weight”, Phillip added.  The interesting discovery was that the birds with more space grew less while those with less space grew more.

The process had four main stages:

(1) Butchering – the birds were placed upside down in a harness (plastic water bottles were used as the makeshift harnesses) then a small incision is made in each bird’s neck.  The birds are left for at least three minutes for the blood to drain;

(2) Scolding – the birds were placed in hot water of 60 degrees and be fully immersed for thirty seconds to a minute or until the feathers come off easily;

(3) Plucking – the birds were placed in a plucking machine for an average of two to three minutes, while there, water is poured from a hose on the birds to wash away the feathers from the carcasses and flush the detached feathers out of the machine;

(4) Dressing – this is the final stage before packaging.  Birds are place on a table or counter where the decapitating, gutting, weighing and final plucking were done.

The entire process took an average of ten to fifteen minutes per bird and the waste was dumped into the compost.  The next poultry project will include more broilers and layers.

ECCAA Can Offer More To The Region