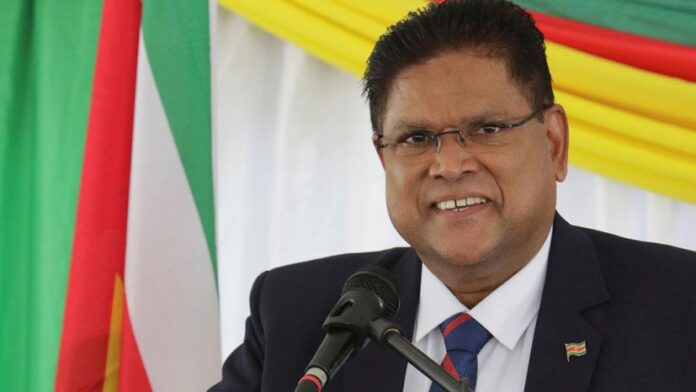 The outgoing chairman of the Caribbean Community (Caricom) and President of Suriname Chandrikapersad Santokhi, says that as the region prepares to celebrate the 50th anniversary of the signing of the Treaty of Chaguaramas, significant steps were made in 2022.

In his end of year statement, the Surinamese President, reflecting on the year, said as the regional body continued to pursue measures to advance the integration movement – a very important decision was made to amend the Revised Treaty of Chaguaramas.

“This allows us, for the Member States that are ready to implement decisions to proceed with these, while the others can join when they are able to do so.

This is particularly significant with respect to accelerating the progress with the Caricom Single Market and Economy (CSME).”

He added that the movement of skilled workers received a boost as the Heads of Government agreed on definitions of and qualifications for, household domestics, agricultural workers and private security officers.

The outgoing chairman said in the case of agricultural workers, it was a timely move.

“That work is being spearheaded by the Co-operative Republic of Guyana, Lead Head in the Caricom Quasi Cabinet for Agriculture, who guides the Ministerial Task Force on Food Production and Food Security (MTF), in advancing the CARICOM Agri-Food Systems Agenda.

In addition, a new portfolio of Industrial policy was added to the Caricom Quasi-Cabinet of Heads of Government.

“Suriname was assigned the portfolio, and is in dialogue with the CARICOM Secretariat and specialized institutions, in preparing a draft action plan, in respect of Industrial Development in the Community, for presentation to the Conference of Heads of Government at the earliest opportunity.”

Concerning Haiti, Santohki said the challenges continued to demand attention and the Caricom leadership group on Haiti – including leaders from Suriname, The Bahamas, Barbados, Belize, Jamaica and St Vincent and the Grenadines, has been focused on several issues.

“In pursuit of a resolution, Heads of Government have held discussions with the Prime Minister of Canada, Justin Trudeau, while Ministers and technical teams have been engaged with their counterparts in Haiti, Canada and the United States.

A high level political mission is being organised to meet with Haitian stakeholders.”

The Caricom Chairman also pointed to international conferences and stated that the outcomes were not entirely satisfactory to the regional body.

He said that as the end of the year approaches, Caricom is starting to emerge slowly “from the shadows of the adverse social, and economic effects of the COVID-19 pandemic.”

He added that although the threat of COVID-19 has not evaporated, along with the debt crisis, a climate crisis and the conflict between Russia and Ukraine, there is still great determination within Caribbean peoples.