Opposition Senator Damani Tabor is calling for a government senator to resign and says he has reported to the police a threat made against his life during a live broadcast of parliament.

“We additionally demand that Senator Weston do the honorable thing and resign as any truly honourable legislator in other countries would,” Tabor said in a statement moments ago.

During Friday’s eventful sitting, senate majority leader Lennox Weston, speaking directly to Tabor said “if it was my daughter I would have already carried you to Parham Wharf and drown you.”

Senate President Alincia Williams Grant warned Senator Weston but he added, “I am going to throw him overboard and if he can swim, he will swim back.”

Weston was angry at Tabor’s consistent reference to a charity started by the wife of Prime Minister Gaston Browne, Maria Browne.

In his statement, Senator Tabor strongly condemned what he called incitement of his abduction and murder.

“This repugnant behaviour is NOT excused by parliamentary immunity,” Tabor insisted. 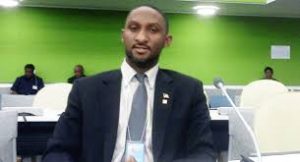 His statement added that the United Progressive Party is calling on all caretakers, spokespeople and executive members to beef up their personal security.”

“I have made a full report to the police,” Tabor said.

The UPP condemned what it called the increasingly “desperate and violent ALP who will descend to any depth to preserve their failing administration.”

During the fracas, opposition senator Chester Hughes was kicked out of the house. More details in a subsequent report.