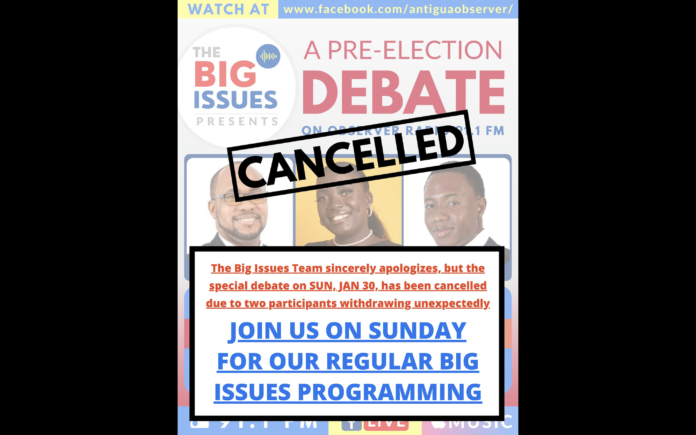 Statement from Observer Radio: Regretfully, the special pre-election debate among candidates and prospective candidates for St. Peter which was scheduled for 1 PM on The #BigIssues this Sunday is cancelled.

As such, we requested a brief official statement from both of the withdrawing participants which we would have used in announcing this cancellation. No such statements have been forthcoming since Friday afternoon. It should be noted that all three participants had, by January 25, agreed to participate.

The #BigIssues will air nonetheless at 1 PM on #NewsCo #ObserverRadio this Sunday, January 30th, 2022 in its regular format. A full slate of topics has since been prepared. Do not miss it!

“Thank you for your invitation to take part in a panel discussion on the St. Peter constituency on this Sunday’s Big Issues. While I would normally welcome the opportunity to discuss my hometown, its history and its potential, I must decline on this occasion.

As you are aware, my party, the United Progressive Party, has just launched its campaign for the upcoming elections, and we intend to lay out our policies and development programs over the span of the campaign. Therefore, I am not in the position to engage in a meaningful debate ahead of the Party’s disclosure. Thank you for your understanding.”

Statement from Chaneil Imhoff: I’d like to take some time to express my disappointment in the cancellation/postponement of tomorrow’s scheduled debate with the candidates for St. Peter due to the withdrawal of the other two candidates.

My team and I have been preparing for quite some time so rest assured that I will be on Big Issues tomorrow from 1:30 – 2:00 pm.

I look forward to sharing my vision for St. Peter and making an announcement for the business community in St. Peter.