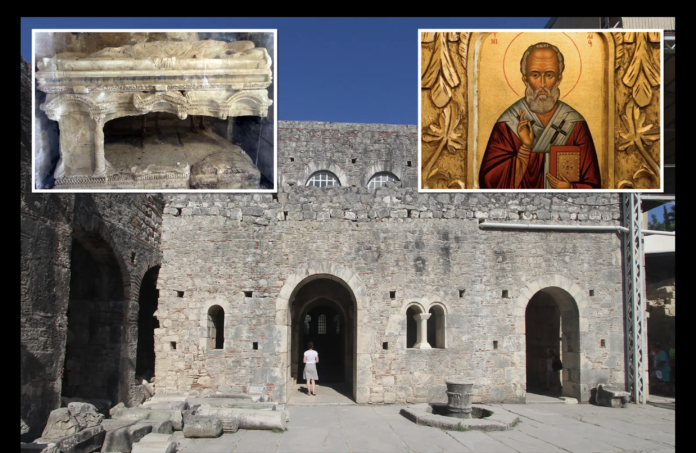 Turkish researchers claim they’ve located the tomb of St. Nicholas, the real-life figure who inspired Santa Claus, under a 5th-century church in Turkey. While it’s long been known that St. Nick was buried in Turkey’s Antalya province, the holy man’s remains were pilfered around 700 years after his death, so his exact burial spot was unknown — until now, Live Science reported.

“This is an extremely important discovery, the first find from that period,” Osman Eravşar, chairman of the Antalya Cultural Heritage Preservation Regional Board, told local news outlet DHA.

Researchers discovered St. Nick’s alleged final resting place after uncovering the remnants of the ancient sanctuary in the coastal town of Demre.

The Kris Kringle precursor, who died Dec. 6, 343, had reportedly been interred at the UNESCO heritage site, the Daily Star reported.

However, the basilica was then submerged by rising Mediterranean sea levels in the Middle Ages, whereupon another church was built atop it in the town — then known as Myra — between the 5th and 12th centuries to protect the holy man’s grave. Unfortunately, thieves from Bari, Italy, desecrated the tomb in 1087 and carted off most of St. Nick’s remains, according to Live Science.

All seemed lost until recent excavations unearthed the remnants of the tile and mosaic flooring from the original basilica, leading them to believe that St. Nick had been interred there.

“Now we have reached the remains of the first church and the floor on which St. Nicholas stepped,” Eravşar said. Researchers speculate that his exact resting spot is at the base of a fresco of Jesus.

While little is known about the real St. Nick, the bishop allegedly boasted a Christ-like résumé of miracles, including rescuing three girls from prostitution, chopping down a demon-possessed tree and saving a ship from wreckage by praying.

His most famous alleged deed entailed donating most of his wealth to the poor, which formed the basis for Father Christmas’ yearly gift-giving sprees.