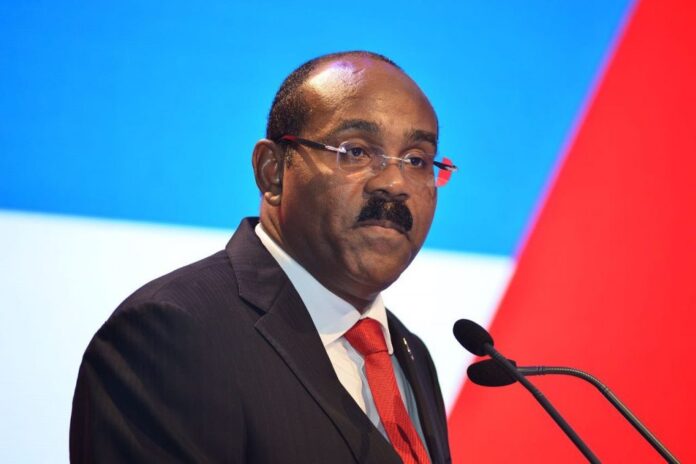 Prime Minister Gaston Browne is seeking to remove Antigua and Barbuda’s name from the FTX Scandal.

He addressed the issue extensively when he spoke on Pointe FM on Saturday. Listen to him below:

It’s a collapse that some have called crypto’s “Lehman moment.”

The bankruptcy of the crypto giant FTX and the resignation of its founder, Sam Bankman-Fried, has left customers in limbo and investors writing off what once looked like the next big thing in tech.

And it happened in a matter of days. But in the complex world of crypto, such a collapse can be hard to parse. Here’s the basics of what went down:

FTX is a digital currency exchange, a platform where people could buy and sell digital assets like bitcoin, dogecoin and ether. Such platforms rose in popularity in recent years as more people looked to invest in cryptocurrencies without the hassle of dealing with the technical side of such transactions, such as setting up a crypto wallet.

How did it become so big?

The company, founded in 2019, quickly rose to international prominence through a series of high-profile acquisitions, aggressive marketing strategies and low trading fees. Competitor  platforms include Kraken, Coinbase and Gemini.

Even those unfamiliar with the technology were lured to FTX with promises that they could park their money in accounts and earn much higher yields than at traditional banks.

Sam Bankman-Fried, FTX’s 30-year-old founder, became the face of the company and, to some, crypto at large. Celebrity endorsements and major sports sponsorships made FTX hard to miss.

Not long after Bankman-Fried started FTX, crypto began to boom. The price of bitcoin, which had traded at around $10,000, shot up in 2021, peaking at more than $64,000. Venture capital money flooded into all things blockchain and crypto, and crypto platforms moved to attract customers beyond the technologists and blockchain evangelists that once fueled its rise.

The price of bitcoin, generally seen as an indicator of the broader crypto market, declined dramatically from its late 2021 heights. It now trades at around $16,000. Other crypto and token values followed suit.

The broader crypto industry decline had already forced many major platforms to shut down, but FTX seemed immune, even buying up some of its struggling competitors.

But things began to change earlier this month, when the balance sheet of a crypto investing firm that was also owned by Bankman-Fried, Alameda Research, was published by CoinDesk, a crypto-focused digital media website.

It showed that Alameda held a large amount of a digital currency created by FTX called FTT. And though that FTT held a certain market value, if the price were to drop,  Alameda would be at risk of insolvency.

FTT is a digital token created by FTX that is similar to cryptocurrencies like bitcoin. Many crypto platforms now create their own tokens as a way to encourage people to use their services by offering perks associated with their tokens. As such, tokens can act like stock in the platform.

These digital tokens use blockchain technology, in which computers contribute to a shared ledger that can be used to track digital assets. The first blockchain project, bitcoin, relies on many computers competing against one another to create a distributed system that no one computer can control.

But not all blockchains, cryptocurrencies or tokens work the same way, and many are no longer distributed as bitcoin. Tokens on a blockchain can be created by a single entity, as was the case with FTT, which was minted by FTX and given out as rewards to users. FTT was also less transparent than other tokens, making it hard to track just how many tokens had been created. People could buy and sell FTT, but trading was relatively limited. Other platforms also held the token.

After Alameda’s balance sheet was leaked, Changpeng “CZ’’ Zhao, CEO of the crypto platform Binance, a rival of FTX, announced on Nov. 6 that his company would sell off all its FTT tokens. The price of FTT dropped sharply.

As the price dropped, many FTX customers moved to withdraw their assets from the platform. Though the extent of the connections between Alameda and FTX were not yet public, a series of recent crypto platform collapses had already put the crypto community on edge.

Get the Morning Rundown

Get a head start on the morning’s top stories.

Those withdrawals would end up resembling a classic bank run, in which people worried about a bank’s solvency rush to get their money out before it runs out of cash. Billions of dollars poured out of the platform.

On Nov. 8, FTX stopped allowing customers to take money out of the platform.

What was not yet public was the extent of the connections between Alameda and FTX, or just how bad things had gotten for Bankman-Fried’s companies.

Those connections began to become clearer in the days following FTX’s move to stop withdrawals, as would its financial challenges. Media organizations including Bloomberg, the Financial Times, The Wall Street Journal and others cited anonymous sources saying that  FTX needed $8 billion to cover the gap between what it owed and what it could pay out. NBC News has not verified those reports, and Bankman-Fried said in an interview Monday with a Vox journalist over Twitter DM that he needed to raise $8 billion in the next two weeks to make things right with account holders.

And in the Vox interview, Bankman-Fried appeared to confirm reports that funds had moved between FTX and Alameda, adding that he “thought Alameda had enough collateral” to cover the moves.

Soon after that, blockchain analysts tracked the flow of $400 million of assets out of FTX accounts, though it was unclear why those funds had been moved.

In a series of text messages to Reuters, Bankman-Fried denied funds had been furtively funneled from one company to the other. He blamed the transfers on an internal mislabeling issue.

However, it is difficult to ascertain how and why the company’s funds were handled the way they were, according to a court filing from FTX’s current CEO, John Ray, who helped navigate Enron through its corporate bankruptcy process in the early 2000s.

Normally, a business produces balance sheets several times a year that provide reliable information on the company’s assets (what the business owns) and its liabilities (what it owes), among other things. But the balance sheets of Bankman-Fried’s firms were never audited, according to the company’s bankruptcy court filings, meaning there is no reliable account or paper trail of what money the company had and where it went.

Ray wrote that the company has thus far secured $740 million of cryptocurrency held by the various companies that made up FTX and Alameda, a number that is only a “fraction” of what they hope to recover.

A lifeline yanked away

Before the full extent of the crisis became public, and desperate to keep his companies afloat, Bankman-Fried grasped for a lifeline as signs of a broader crypto crash loomed.

Zhao, one of FTX’s first investors, stepped in to make a play for his former rival. On Nov. 8, he announced that Binance would purchase FTX for an undisclosed amount in what would essentially constitute a bailout for the beleaguered firm. But Binance quickly backed out, with Zhao citing reports that FTX had mismanaged user funds and information gleaned during the standard due diligence process that accompanies such deals.

Bankman-Fried has acknowledged the company’s problems on Twitter, where he remains active. Last week he posted a lengthy thread that started “1) I’m sorry. That’s the biggest thing.”

Last Friday, Nov. 11, Bankman-Fried stepped down as CEO of FTX, and the companies he oversaw filed for Chapter 11 bankruptcy. The Wall Street Journal and the Associated Press, citing anonymous sources, have both reported that FTX now faces investigations by the Securities and Exchange Commission and the Department of Justice. NBC News has not verified those reports.