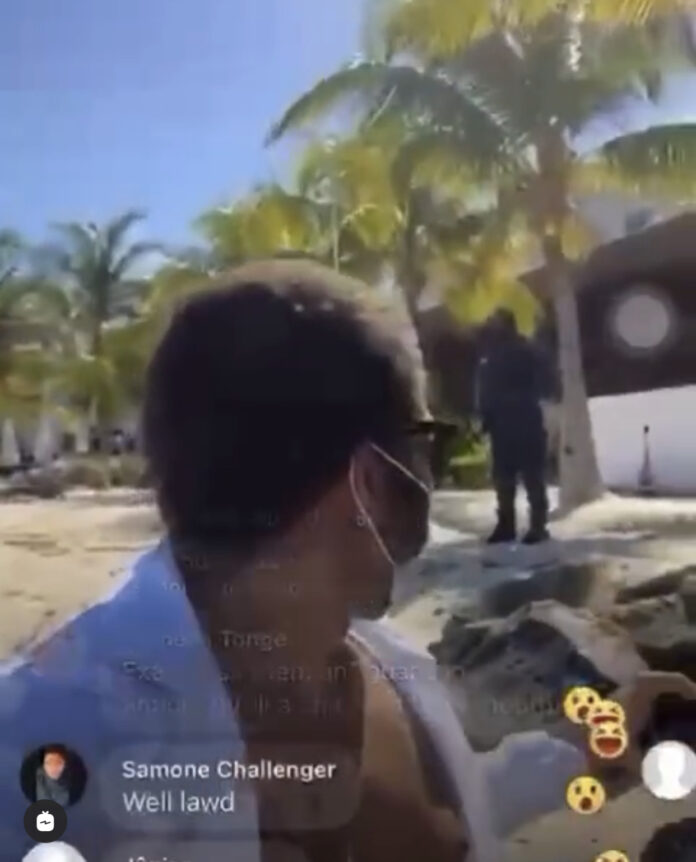 The widely shared videos led to officers being accused of showing bias against locals by wrongfully issuing tickets, while not meting out the same treatment to visitors.

Facebook went into a frenzy on Monday evening after a video posted on the site showed social media personality Ameen Diaz, more popularly known as “J’Truth”, engaging in a heated discourse with police officers while they were on a beach in close proximity to the Hodges Bay Resort.

At the time, the lawmen were preparing to issue Diaz with a ticket for not wearing a mask, despite the fact that other persons on the beach were similarly not masked, as Diaz pointed out.

This prompted many to question the motives of the police as another set of pictures and videos that showed a group of tourists without masks on the beach were being circulated.

While speaking on Observer AM on Wednesday, Inspector Thomas claimed that people are using social media to distribute misinformation and to deceive the public on certain matters.

“What some people are doing is using it to drum up support or for that matter garner attention, so then at the end of the day whatever wrongs they may have committed they are trying to make it look right.

“At the end of the day, we seem to be taking that bait hook, line and sinker, and believe what we see and hear on social media is the truth, the whole truth and nothing but the truth, but there are always several sides to every story,” he said.

Inspector Thomas said there were certain aspects of the incident that were not captured on camera.

“When the officer responded to that report, the gentleman in question was not at the time wearing a face mask. However, he thought it necessary and smart enough to replace his face mask and then I believe made that video to at least give the general public the impression that he was there on the beach and then the police without discretion, reason or any form of common sense, ticketed him when that clearly is not the case.”

According to Thomas, reports reached law enforcement officials that the gentleman in question was in fact attempting to access private property. This prompted officers to arrive on the scene.

An investigation into the matter is however underway.

The senior officer also spoke about another video involving a young woman, who claimed she received a ticket from police while she was relaxing on her veranda with relatives.

He clarified that it was in fact the female’s relatives and not her who were ticketed after the said relatives were seen on the public road without masks.

Thomas admitted that there were cases last year where law enforcement officials did in fact err but he said it was “highly unlikely” for these sorts of incidents to still be occurring.

He also denied claims that police were giving special treatment to tourists. According to Thomas, once reports reach the respective police stations about any incident then the police will respond.

In a social media post, Browne noted that “all beaches belong to the people and shall remain accessible to them via demarcated public accesses”.

Her comment stemmed from the public outrage following the same J’Truth video showing a gate reportedly being erected by Hodges Bay Resort that blocked access to the beach.

The gate has however since been taken down by the Development Control Authority (DCA). The DCA could not be reached for comment.