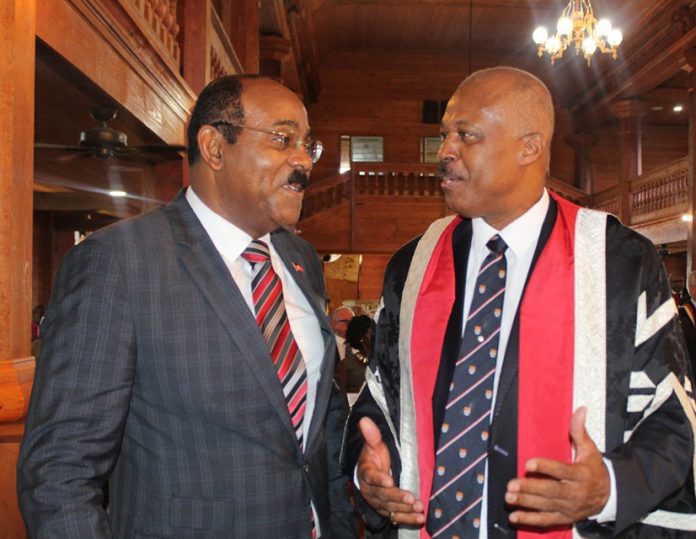 The Antigua and Barbuda government has stated its position quite clear: it will not be party to attempts to diminish the role of the Vice Chancellor of the University of the West In- dies, Sir Hilary Beckles.

PM Browne was making his first public comments on the issue after alarm was raised in the media over the past week with the publication of an article by David Commissiong of St Vincent and the Grenadines. The Antigua and Barbuda leader used the medium of his weekly radio programme, the Browne and Browne show on Pointe FM to address the issue, indicating that Antigua and Barbuda stands firmly in support of Sir Hilary, who he described as one of the Caribbean’s ‘finest sons.’

He noted that the UWI Chancellor, which is largely a ceremonial position, had commissioned a study of the governance structure of the university “ostensibly to strengthen the governance of the UWI” under the present circumstances, where the university too, has been negatively impacted by the COVID-19 pandemic.

The prime minister said while he has no difficulty with the premise of the study, what seems to have happened is that the Chancellor seemed determined to appropriate “unto himself” much authority at the expense of the Vice Chancellor, Sir Hilary.

“I just want to say here that Antigua and Barbuda will resist any attempts to emasculate the position of Sir Hilary, one of our finest sons, to facilitate the uncontrolled ego and unbridled ambition of others who may want to lead the university,” PM Browne declared.

Further, he credits Sir Hilary for the “fine job” he has been doing on behalf of the UWI. “Sir Hilary has done an excellent job to the point where the UWI is one of the top universities in this hemisphere and among the top four per cent worldwide. We have to continue to support Sir Hilary and the leadership at the UWI,” he remarked.

PM Browne is urging the Chancellor to “moderate his conduct” and to work along with Sir Hilary and the UWI leadership to pursue whatever reform or realignment that may be required at the UWI. He frowned upon the Chancellor’s attempts to “utilise whatever influence” he has to diminish the role of the Vice Chancellor. “Such moves will be resisted!” he declared.

The Antigua and Barbuda leader also wants to see CARICOM heads be more vocal on the matter, noting that while they do not run the university, the ministers of education are members of the university’s council and thus “we have locus standi.”

Caribbean governments are also part of the university’s charter.

“I expect heads (of government) will provide necessary leadership to ensure that individuals do not plunge the UWI into crisis at this time of a pandemic. What is needed is stable leadership which Sir Hilary has provided over the past six years. Personal ambitions cannot supersede the stability of the UWI,” he declared. — PointeXpress