A lack of eligible women means that for yet another year, the Miss Barbuda Pageant will not form part of Caribana celebrations on the sister isle.

The five-day carnival activities commence today on the island of about 1600 inhabitants but from that population, the Caribana organizing committee has been unable to pull together a handful of girls to compete.

Not since Asha Frank in 2015 has Barbuda had its own queen. The former Miss Antigua & Barbuda turn politician told Antigua News Room that she doesn’t know what there is not pageant this year.

The Caribana committee warned of this problem in the past but promised the pageant will be held every two years to allow ladies to come of the 18 years required for competition.

A pageant was due to be held in 2017 and its absence is likely to come as a disappointment to pageant lovers.

Notwithstanding that, when Caribana commences later today a full slate of activities are expected to bring life to the normally dormant island. 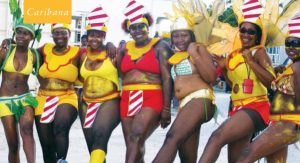 Activities move off with an opening parade though the village Codrington at noon today, followed by the Barbuda Talented Teen Competition and the Caribana Junior Calypso Competition this evening.

Friday is International Artiste Night featuring Edwin Yearwood from Barbados and Asa Bantan from Dominica along with local acts.

The Prime Minister’s Aquatic Day is back for a second year on Saturday.

Other activities for Caribana are the horse racing competition on Sunday followed by the Calypso Monarch Competition and a J’ouvert on Monday.