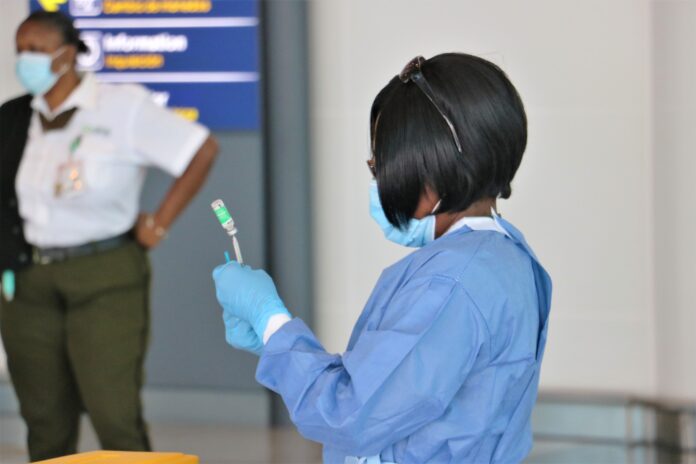 AstraZeneca’s coronavirus vaccine is 100 per cent effective at keeping people out of hospital and stopping them dying of the disease, a US trial found today.

An extra trial of the vaccine in America found it was more effective than it was in the UK research – preventing 79 per cent of all symptomatic infections – and nobody got seriously ill.

And it works just as well in over-65s as it does in younger people. The study was the largest one so far conducted on older people, including more than 6,000 of them.

The trial — which involved 32,000 people in total — also confirmed the vaccine doesn’t increase the risk of blood clots, which is a confidence boost after safety concerns in Europe rattled public faith in the jab last week.

American authorities had insisted the vaccine was trialed in the US before they agreed to approve it and the extra research adds to proof the jab works. US regulators are set to give the jab the green light in the coming weeks.

Oxford’s Professor Andrew Pollard, who runs the vaccine trials, said the results were ‘remarkable’, and its inventor Professor Sarah Gilbert said she was ‘very pleased’.

The jab-makers were in need of good press after the past fortnight saw more than a dozen European countries shun the jab amid fears it could cause blood clots on the brain – on which they have now backed down.

Boris Johnson is today preparing to call EU leaders demanding they shun ‘vaccine nationalism’ amid fears they will push ahead with an export ban that could delay the UK’s rollout by months.

Britain will also have to cope with five million fewer doses of the jab than expected in April because an expected shipment from India has been cancelled. This is expected to mean the vaccine drive, which gave out a record 844,285 jabs yesterday, will have to stick mainly to second doses instead of new patients.

Some 32,449 people across all age groups took part in the phase three trial in the US, Chile and Peru, with a total of 141 cases of symptomatic Covid-19 reported.

Around two thirds of all the participants had the real vaccine – 21,583 – and the rest had a fake jab so the effects could be compared. Full results of the trial have not yet been published.

The results showed that among people aged 65 and over, there was 80 per cent protection against developing symptomatic Covid-19, Oxford said.

This comes after officials in Europe, who had smeared the vaccine on yet another occasion, claimed that the vaccine didn’t work on people over 55 and tried to prevent it being used on elderly people.

Overall the study found that the effectiveness of the jab against symptomatic Covid was even higher than it had been in the original trials that took place in the UK, South Africa and Brazil.

‘These results are great news as they show the remarkable efficacy of the vaccine in a new population and are consistent with the results from Oxford-led trials,’ said Professor Pollard.

‘We can expect strong impact against Covid-19 across all ages and for people of all different backgrounds from widespread us of the vaccine.’

An independent data safety monitoring board (DSMB) also found no safety concerns relating to the vaccine.

After European leaders this month claimed people were developing brain blood clots and even dying after having the AstraZeneca vaccine, inspectors looked at the risk of blood clots and found it was not increased at all.

They looked at a specific condition that had scared officials in Germany, called cerebral venous sinus thrombosis, and found there wasn’t a single case recorded in the clinical trial.

The European Medicines Agency itself – which first launched an investigation and triggered panic across the continent – last week admitted there was no proof of a link to blood clots and backed down on its warning.

Health officials around the world, including Britain’s regulator the MHRA and the World Health Organization, have urged countries to keep using the vaccine to stamp out coronavirus.

‘Another large trial in different countries to what we had before again reporting on the safety and high efficacy of this vaccine, so it’s really good news to see that.’

She added: ’20 per cent of people in this trial were over the age of 65 and there was no drop in protection for those people. It was just as good in the over-65s as it was in the younger people and that’s very clear from this trial.’

On Europe’s concerns, Professor Gilbert said: ‘I’d say the balance remains hugely in favour of using this vaccine. Across Europe there are thousands of deaths a day occurring from Covid.

‘It’s really important that we get the chance to protect people as quickly as possible, this vaccine is available for use in Europe and it will save lives.’

AstraZeneca will now submit the data from the trial to the US Food and Drug Administration (FDA) in the hope the jab can get approved for use in the US.

Professor Ann Falsey, from the University of Rochester School of Medicine in the US, and co-lead investigator for the trial, said it was ‘exciting to see similar efficacy results in people over 65 for the first time’.

She added: ‘This analysis validates the AstraZeneca Covid-19 vaccine as a much-needed additional vaccination option, offering confidence that adults of all ages can benefit from protection against the virus.’

AstraZeneca’s vice-president Sir Mene Pangalos said: ‘These results add to the growing body of evidence that shows this vaccine is well tolerated and highly effective against all severities of Covid-19 and across all age groups.

‘We are confident this vaccine can play an important role in protecting millions of people worldwide against this lethal virus.

‘We are preparing to submit these findings to the US Food and Drug Administration and for the rollout of millions of doses across America should the vaccine be granted US Emergency Use Authorisation.’

The US trial saw two doses given four weeks apart, whereas previous trials have shown that spacing the doses by 12 weeks made the vaccine more effective.

AstraZeneca said leaving an interval longer than four weeks – as is happening in the UK – can increase efficacy and ‘accelerates the number of people who can receive their first dose’.

This is understood to be because it allows the body to cement the immunity from the first dose before the second – the booster dose – provokes a second, separate reaction and lets the already established protection strengthen itself.

As part of an agreement with Oxford, AstraZeneca is supplying the vaccine on a not-for-profit basis for the duration of the pandemic and in perpetuity for low and middle-income countries.

The news comes as polling for YouGov suggests confidence in the safety of the vaccine has dropped in the last two weeks in Spain, Germany, France and Italy.

Some 55 per cent of Germans said the AstraZeneca vaccine is unsafe while 32 per cent said it is safe.

AstraZeneca’s vaccine was already seen as unsafe in France but concerns have increased even further, with 61 per cent now saying it is unsafe while 23 per cent say it is safe, according to the survey of almost 9,000 people in seven countries.

More than a dozen European countries suspended use of the vaccine over concerns about blood clots, although most have now resumed its use.

The European Medicines Agency and the World Health Organization (WHO) have ruled that the AstraZeneca jab is safe and effective.

Boris Johnson is preparing to call EU leaders demanding they shun ‘vaccine nationalism’ amid fears they will push ahead with an export ban that could delay the UK’s rollout by months.

The PM will urge the bloc to respect legal contracts for supplies after Ursula von der Leyen, the EU president, delivered an extraordinary threat to hold hostage more than 19million AstraZeneca doses due to be shipped to the UK over the coming weeks.

Ms von der Leyen ramped up the rhetoric this weekend amid shambolic progress on the continent, warning the EU has the power to ‘forbid’ exports, adding: ‘That is the message to AstraZeneca.’

The sabre-rattling reflects growing frustration on the continent that the EU has not been able to bully the British-Swedish manufacturer into giving it priority – even tough Britain signed deals for supplies far earlier.

As tension rose again today, UK sources warned that the bloc is on the verge of going down a ‘terrible path’, pointing out that the UK invested millions in the Oxford University research and the vaccine is being provided to the world at cost.

Ministers stressed the EU has previously vowed it will not ‘block companies from fulfilling their contractual obligations’. ‘We expect the EU to stand by their commitments,’ said care minister Helen Whately.

Mr Johnson is understood to have spoken to Ms von der Leyen, along with Dutch and Belgian prime ministers Mark Rutte and Alexander De Croo, last week and is set to make further calls in the coming days.

Experts have warned that EU action could hit UK supplies of the AstraZeneca vaccine in May and June. One source suggested the fall in supply could be as much as 20 per cent, but another said the figure was likely to be lower.

With the pace of the vaccine rollout already set to dip next month because of a shortfall in supply from India, the EU threat will raise fears about the Government’s ability to hit its target of vaccinating all adults by the end of July.

It came as an AstraZeneca source accused Europe of failing to ‘get its act together’ on the jab, adding that the bloc is sitting on up to 12 million unused vaccines.