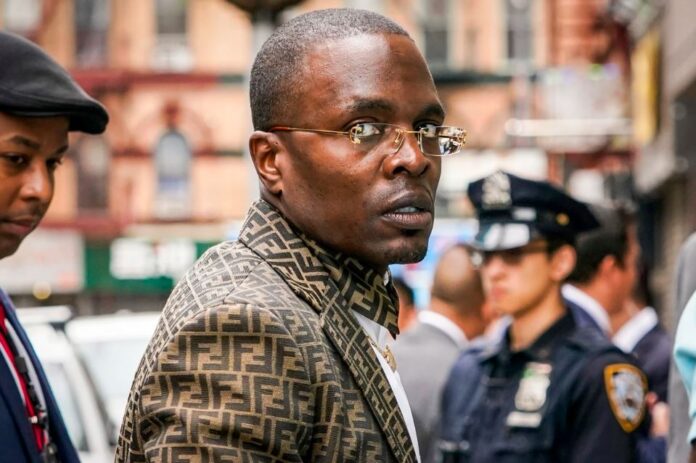 The New York City bishop who was robbed of around $1 million in jewelry during a live-streamed service in July was arrested Monday morning and is facing fraud and extortion charges, according to the U.S. Attorney’s office.

Lamor Whitehead, who leads Leaders of Tomorrow International Ministries church in Brooklyn’s Canarsie neighborhood, was charged with two counts of wire fraud, one count of extortion and one count of making material false statements to the FBI, court documents say.

In one instance, Whitehead, 45, is accused of convincing a parishioner to invest around $90,000 of her retirement savings with him under the pretense that he’d help her buy a home. Instead, he allegedly spent the money on “thousands of dollars of luxury goods and clothing.”

He’s also accused of using threats of force to obtain $5,000 from a New York businessman, which the businessman gave to Whitehead, the court document states.

Whitehead also allegedly tried to convince the same businessman to lend him around $500,000 and give him “interest in real estate transactions” in exchange for “favorable actions by the New York City government,” which he could not obtain, according to the U.S. Attorney’s office.

FBI agents executing a search warrant were allegedly told by Whitehead that he only had one cellphone, when he in fact had a second one.

“As we allege today, Lamor Whitehead abused the trust placed in him by a parishioner, bullied a businessman for $5,000, then tried to defraud him of far more than that, and lied to federal agents,” Damian Williams, U.S. Attorney for the Southern District of New York, said. “His campaign of fraud and deceit stops now.”

If convicted, Whitehead faces a minimum of 20 years in prison, court documents say.

“Bishop Lamor Whitehead is not guilty of these charges.

He will be vigorously defending these allegations. He feels that he is being targeted and being turned into a villain from a victim.”

In a court appearance Monday, Whitehead was released on personal recognizance on a $500,000 bond.

The conditions to his release are that he can’t travel outside of the southern and eastern districts of New York, New Jersey or Connecticut and he isn’t allowed to contact the victims in this case, according to U.S. Attorney spokesperson Nicholas Biase.

He must also maintain “verifiable employment” and cannot apply for a new passport.

Whitehead made news in the summer when assailants stormed a livestreamed Sunday service and robbed him and his wife of $1 million worth of jewelry.

“When I see them come into the sanctuary with their guns, I told everybody to get out, everybody just get out,” Whitehead said in a video posted to Instagram at the time. “I didn’t know if they wanted to shoot the church up or if they were just coming for a robbery.”

In September, the bishop made headlines again when he was removed from his church by police after video appeared to show him grabbing a woman and pushing her.

He was preaching at the Brooklyn church when someone in the congregation started yelling inaudibly off-camera. He paused the service to respond.

“You wanna come preach?” he’s heard saying toward the end of the livestreamed service. “Come on up here. I’m gonna make you famous.”

As a woman approaches him, video appears to show the bishop grabbing her hair by the back of her neck and pushing her off-camera.

The woman, identified as Tarsha Howard was charged with trespassing and disrupting a religious service.

Whitehead wasn’t arrested, according to police, but the bishop disagreed and said he was put in a holding cell.

“You put me in prison and then let me out and say, ‘Oops, you made a mistake’?” he said in a video at the time.

“But you don’t get to arrest me for no reason. I’m going to protect my family.”