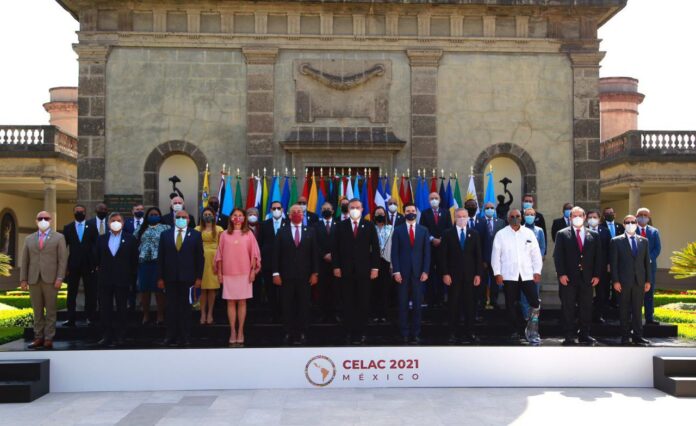 After the Community of Latin American and Caribbean States (CELAC) was practically paralyzed in recent years, Mexico’s work as its Pro-Tempore President (PTP) during 2020 and so far in 2021 has reported important achievements, focusing on specific issues of international cooperation and other spaces of coincidence, setting aside political differences between member States.

On July 24th, Mexico hosted the 21st Meeting of CELAC Foreign Ministers, the first regional face-to-face meeting since the outbreak of the pandemic, an event that coincided with the commemoration of the anniversary of the birth of Simón Bolívar “The Liberator”, whose historic aspiration of Latin American unity was the spirit that framed this meeting. The Mexican PTP managed to bring together 21 Ministers, 4 Vice Ministers and 7 Special Envoys* who represent Governments of heterogeneous and diverse political ideas, some with antagonisms between them, but who, thanks to the perception of a better future through union, were able to sit down and overcome their differences to discuss matters of common interest. It was noteworthy the active participation of the representatives of the six Eastern Caribbean States: Antigua and Barbuda, Dominica, Grenada, Saint Kitts and Nevis, Saint Lucia and Saint Vincent and the Grenadines.

As the said meeting showed, today, CELAC has become the main body for coordination and regional dialogue for all the countries in the region and exposes the failure of the other organization of our continent, the Organization of American States (OAS), under the General Secretariat of Luis Almagro, which has been characterized by not consulting the member States, in detriment of the regional unity.

It is in this context that the President of Mexico, Andrés Manuel López Obrador, has made a call to review the usefulness of the OAS, without ruling out its dissolution, and to build a true Community of Latin American and Caribbean States, with reference to the European Union. It also raises a question of great importance in this context: that of how the relationship with the United States should be, in particular, in a world characterized by the emergence of rivalries between powers and large economic blocs. In this regard, the Mexican President affirms that “it is time for a new coexistence among all the countries of the Americas because the model imposed more than two centuries ago is exhausted, it has no future or way out, it no longer benefits anyone. We must put aside the dilemma of joining the United States or opposing ourselves defensively”. “It is time to […] dialogue with the US rulers and convince and persuade them that a new relationship between the countries of the Americas is possible”. Likewise, the President affirms that the experience of economic integration with sovereignty that Mexico has put into practice in the conception and application of its trade agreement with the United States and Canada could result of great interest.

It is in the interests of all the countries of Latin America and the Caribbean to bet on a renewed continental dialogue and build a bloc capable of economically and commercially strengthening the entire continent to better compete with the most dynamic regions in the world. The multiple belongings of Mexico, being part of North America, Latin America and at the same time a Caribbean country, make it a kind of hinge to build consensus. It is true that there are different positions on some issues on the regional or international agenda, but, as the Secretary of Foreign Affairs of Mexico, Marcelo Ebrard, has pointed out: “if someone thinks that the requirement for cooperation is unanimity, they should say goodbye to the International cooperation, what would be the meaning of multilateralism if we are not going to respect the principles of sovereignty of each one?”.

Likewise, the Mexican Foreign Minister has emphasized the importance of regional cooperation in the framework of the COVID-19 pandemic, and stated that for a year and a half the countries of the region have shown solidarity and support. “The great lesson is that if we do not act together as one voice, no one is going to take care of us, no one will wonder if Latin America already has vaccines”. Ebrard also pointed out that if we do not act together “it is impossible [for the region] to have influence in the world, divided we are condemned to follow the decisions that others make”.

Therefore, from its role as Pro Tempore President of CELAC, Mexico underlines the importance of having a solid union between the States of Latin America and the Caribbean, and of a new association with the United States and Canada, creating a mechanism that reflects the interests of all the States of the region.

It is time to rethink the kind of union that we want in our Latin America and the Caribbean in particular and in the continent in general and, as history has shown us on various occasions: together we are stronger.

* All Latin American and Caribbean countries were represented, with the exception of Brazil, which suspended its membership in CELAC last year.

By Maximiliano Reyes Zúñiga, Undersecretary for Latin America and the Caribbean of the Mexican Ministry of Foreign Affairs, and Oscar Esparza-Vargas, Ambassador of Mexico to the Eastern Caribbean States.