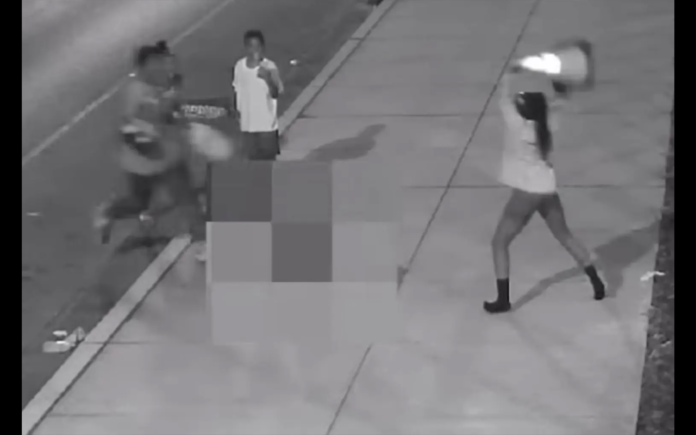 A group of deranged teenagers were caught on camera laughing and taking videos as they beat an elderly man to death with a traffic cone in Philadelphia last month, according to police.

James Lambert, 72, was viciously attacked by a group of seven teens just after 3 a.m. on June 14 as he was walking across Cecil B. Moore Avenue, police told NBC10.

Disturbing video of the incident, released by police on Friday, shows Lambert trying to walk away from the group as they follow him across the street before one of the male assailants strikes the victim from behind with a cone.

The impact knocked Lambert to the ground. While he was down, a girl picks up the same cone and chucks it at him as another one in the group records on his phone, the video shows.

Lambert appears to get up and flee down the sidewalk away from his attackers. But the same girl picks up the cone again, chases down Lambert and throws it at him once more while some of the teens smile and laugh.

One girl, however, holds both her hands over her mouth in horror after the blow.

Lambert was taken to a local hospital where he died the following day from his injuries, police said.

Footage shows the group leaving the scene, including a boy smiling as he pedals away on a scooter with another boy.

None of the teenagers have been arrested as of Friday. The Philadelphia Police Department is offering a $20,000 reward lead them to those responsible.