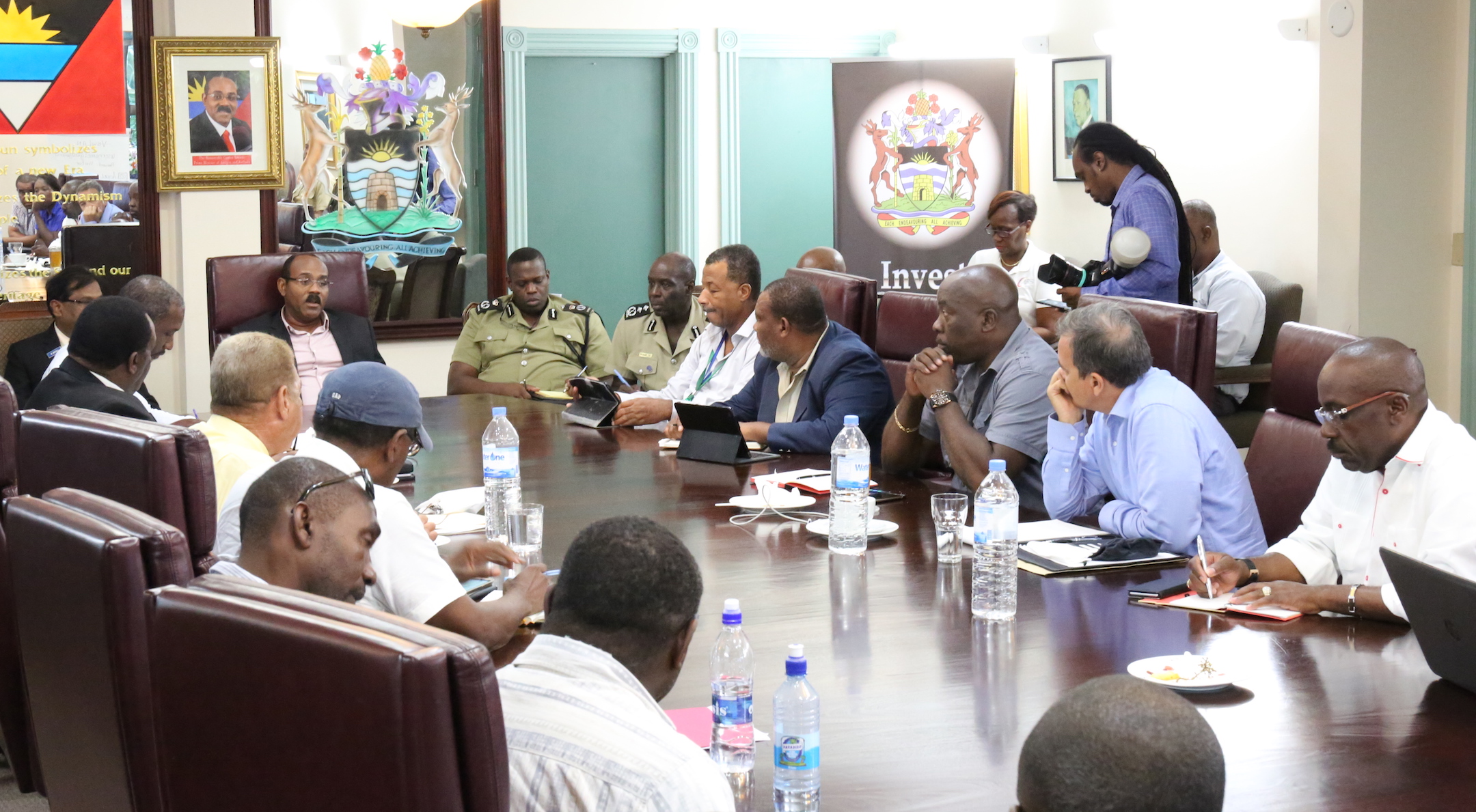 Prime Minister Gaston Browne on Monday evening convened a special meeting of the Cabinet of Antigua and Barbuda with Heads of Departments responsible for disaster mitigation and recovery.

Prime Minister Browne advised his Cabinet colleagues and the Heads of Departments to include the Commissioner of Police and his Deputies, the Chief of Defense Staff and Officers, Meteorological Office Director and officers from the Coast Guard, Airport Authority and Tourism that a number of friendly nations have offered to provide assistance after the storm, a number of banks have opened overdraft facilities to the government and donations of relief supplies valued at over half a million US dollars will arrive in the country immediately after the storm.

The country’s leader advised the attendees that they must work towards ensuring that Antigua and Barbuda return to business as usual in the quickest possible time after the storm.  He pointed out that of critical importance will be the reopening of the airport and the seaport after the storm.

The Prime Minister was advised that with the effects of Hurricane Irma expected to make landfall on Tuesday evening, the airport will close at 4 pm following the arrival of a number of scheduled international flights.

The Minister of Health, Molwyn Joseph, who is responsible for the Solid Waste Authority reported that a number of major waterways have been cleared to include Jennings Ghaut, All Saints Main Road, Yorkes Drain, Buckley Line Drain and Herberts Drain.

The Tourism Authority also reported that a number of hotels have opted to relocate some of their guests to other properties, while a number of airlines have implemented amended schedules in and out of Antigua and Barbuda.

Meanwhile, the Public Works Department reported that they are in readiness for reconstruction of damaged roads after the storm and currently they have secured a number of clinics to include Johnsons Point, Brownes Avenue, All Saints, Clarehall and Grays Farm.  It was also reported that the government’s crushers have been secured along with the hot mix plant.  The police and the Central Board of Health have been provided with heavy duty trucks and equipment to assist in the post hurricane efforts.

The Prime Minister outlined that having received the various reports he is assured that all is in place for the impending storm.

Also in attendance at the special Cabinet Meeting were representatives of the Central Board of Health, the Customs Division, the Port Authority and the West Indies Oil Company.