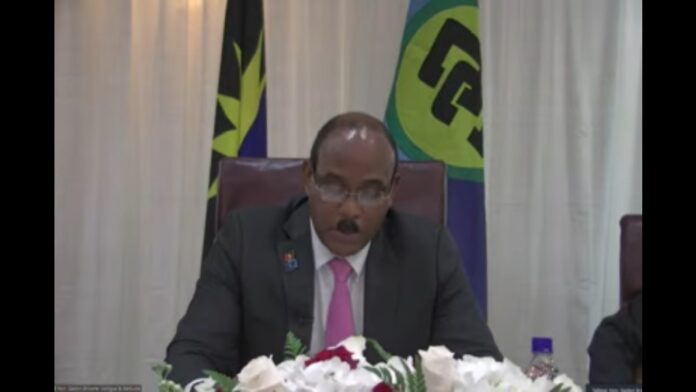 New chairman of the Caribbean Community (CARICOM), Gaston Browne, is pushing fellow members of the regional bloc to urgently advance the integration process or run the risk of being left behind.

In his first address as chairman to the 42nd Regular Meeting of the Conference of Heads of Government, which was held online, Browne said there was a protocol on the current agenda that allowed any group of member states within CARICOM to move quickly in the unity mandate than the general membership.

He urged colleagues to approve it during their current meeting instead of “kicking it down the road”.

Browne, who is also prime minister of Antigua and Barbuda, told the members of the regional grouping on Monday that they did not have the luxury of delaying the approval of key instruments such as financial services agreements, investment policy and incentive regimes, and the development and regulation of a regional securities market.

Full implementation of the CARICOM Single Market and Economy (CSME) was required for the transformation of regional economies and to facilitate a post-COVID recovery, Browne told his colleagues.

He said that CARICOM needed to shift gears.

Reiterating remarks he made when he first addressed CARICOM leaders several years ago, Brown said: “Advancing the integration movement cannot be achieved by waiting for the most reluctant of us to act. The time has come for integration by a coalition of the willing in various sectors of the economy instead of allowing those who are reluctant to stymie our efforts to advance.”

Outgoing secretary general of CARICOM, Irwin LaRocque, admitted that more could have been accomplished with the CSME.

However, he said that because of the regional bloc’s decision-making process, “we can only move as fast as the slower member state”.

In a parting shot, the secretary general noted that in order to drive the integration process “the time has come to consider favourably the concept of enhanced cooperation to allow those who are ready to go forward to do so”.

Turning to recovery efforts from the COVID pandemic, the CARICOM chairman said that a crucial weapon in the battle to recover from the effects of the virus was the acquisition of vaccines.

He hailed outgoing chairman Dr Keith Rowley for his sustained efforts in lobbying various countries outside of the region to obtain vaccines for CARICOM states.

However, he said that the other side of the equation was to ensure that a sufficient number of CARICOM nationals were inoculated so that member states could gain herd immunity.

“I urge those who are reluctant to take the jab to think again … . No one is safe until everyone is safe,” he added.

The CARICOM chairman urged his fellow regional heads to “give some time and attention over the next two days to this important question of vaccine hesitancy in our region and to devise joint strategies in tackling it head-on”.

According to Browne, in tourism-based economies the resumption of inter-regional travel was one key element in getting economic activity back to normal. Increased movement of people within CARICOM will be a major boost to our economies in seeking to rebound, he said.

Browne wants CARICOM states to immediately establish common or harmonised regional health protocols for travel that are clear to the public.

“The discriminatory practice of banning travel from member states with elevated levels of COVID while accommodating guests from countries of higher risks should be discouraged,” he said.

The new CARICOM chairman reasoned that the COVID-19 pandemic had brought into sharp focus the dangers of the region’s overwhelming dependence on tourism for its economic well-being.

He argued that economic diversification, especially in agriculture, was vital to the region and there was the need for countries to accelerate their efforts in strengthening the sector.

Browne said that part of the dialogue to strengthen the agricultural sector across the region must be a more meaningful and revitalised role for the Caribbean Development Bank and the CARICOM Development Fund.

He contended that these two vital CARICOM institutions should be realigned and retooled to scale up their operations and become facilitators to drive economic expansion.