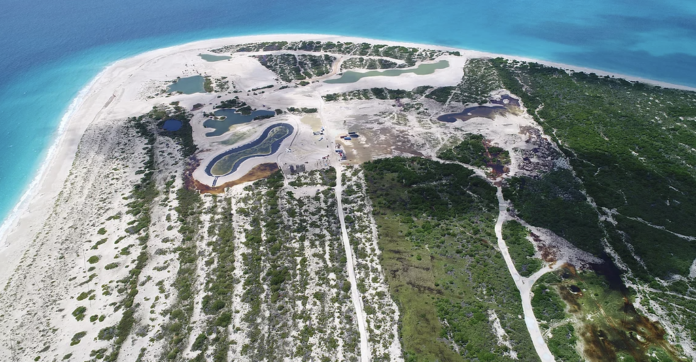 Global Legal Action Network and Front Line Defenders are deeply concerned over the repeated targeting of human rights defenders resisting destructive private luxury tourism developments in Barbuda. A group of human right defenders inspecting one of the contested construction sites on the island have been charged with unlawful trespass. Their hearing, where they could potentially face criminal charges, is set to happen on 29 September 2022.

After Hurricane Irma hit the island in 2017, the central Government in Antigua and Barbuda pushed through new laws that enabled construction of a multi-million-dollar luxury tourism resort and a golf course known as the ‘Barbuda Ocean Club’ on a protected wetland, and a private jet airstrip through 300 acres of untouched forest.

Barbudans opposing the private development of their land – which has been held communally by Barbudans ever since the abolition of slavery – have experienced harassment, intimidation, defamation, and criminalization, including threats from the Prime Minister of Antigua and Barbuda himself. Un 2015, following local opposition to the proposal of the first project, the Prime Minister of Antigua and Barbuda Gaston Browne stated that “economic terrorists” who wanted to “block investment … and keep our people unemployed … would have to face the full extent of the law for any infractions whatsoever”. When Barbudans filed a legal claim against the construction of the international airstrip, Gaston Browne wrote online that “these imbeciles have resorted to their ignorantly destructive ways, trying to undermine a much needed infrastructural project”.

A group of land rights defenders, including an elected member and employees of the Barbuda Council, have repeatedly expressed concern about the human and environmental impacts of the construction, which may put the island at greater risk of future climate events. It is also alleged that the approval of the development’s construction failed to meet the basic legal standards and follow appropriate procedures. In July 2020, after a protest against the main developer, PLH (short for “Peace, Love and Happiness”), Gaston Browne told the press: “Anytime they do anything illegal over there I am sending the police and army … I rather fight them and resign than to turn a blind eye.”

These threats materialized on 18 September 2020, at another peaceful protest against PLH Barbuda, when two Barbudan Council members – Paul Nedd and Devon Warner – were arrested and charged with trespass and breaking COVID-19 rules for not wearing face masks. They were part of the group of 22 locals who attempted to inspect the PLH construction site at Palmetto Point. They came to inspect compliance with the conditions of approval for the project. This move came after the Development Control Authority had issued a non-compliance notice on 31 August alerting PLH its construction activities were not in line with the conditions of approval.

On 1 October 2020, the Eastern Caribbean Court ordered PLH to halt construction at both Palmetto and Coco Points. However, locals and human rights defenders claimed to have witnessed ongoing operations. In January 2021, the same court lifted the injunction on PLH’s activities and issued an order to the Barbuda Council forbidding them from entering PLH Barbuda’s construction area for any reason, even inspection.

The group of 22 locals and human rights defenders, including Paul Nedd and Devon Warner, as well as other Barbudan Council members, are still facing charges for trespass and have been summoned to court multiple times in front of an unknown “virtual complainant”. Despite the requests for disclosure, the complainant’s identity has not been revealed yet. The group of 22 have all been summoned and are due to appear together in court on 27 September 2022. Incidentally, the police offices where the hearing is due to be held were sponsored by no other than PLH.

In June 2021, a group of United Nations Special Rapporteurs issued a joint communication to both the government of Antigua and Barbuda and the US-based private developers, expressing deep concerns “regarding the potential impacts of the Barbuda Ocean Club Project on human rights, including the rights to food, water and sanitation, housing, and a healthy environment, as well as cultural rights”. The UN Special Rapporteurs referred to the arrest of various concerned Barbudans. In a reply, PLH stated that close to 40 people trespassed PHL’s leased land and denied the arrest or the charges faced by other than two of the 22 locals.

Front Line Defenders and Global Legal Action Network strongly condemn the prolonged prosecution process, judicial harassment and repeated intimidation against Barbudans land defenders. These organizations call on the authorities of Antigua and Barbuda to drop the charges, stop the criminalization and defamation against land defenders in Barbuda and to take the necessary measures to enable them to continue to safely defend their collective rights.