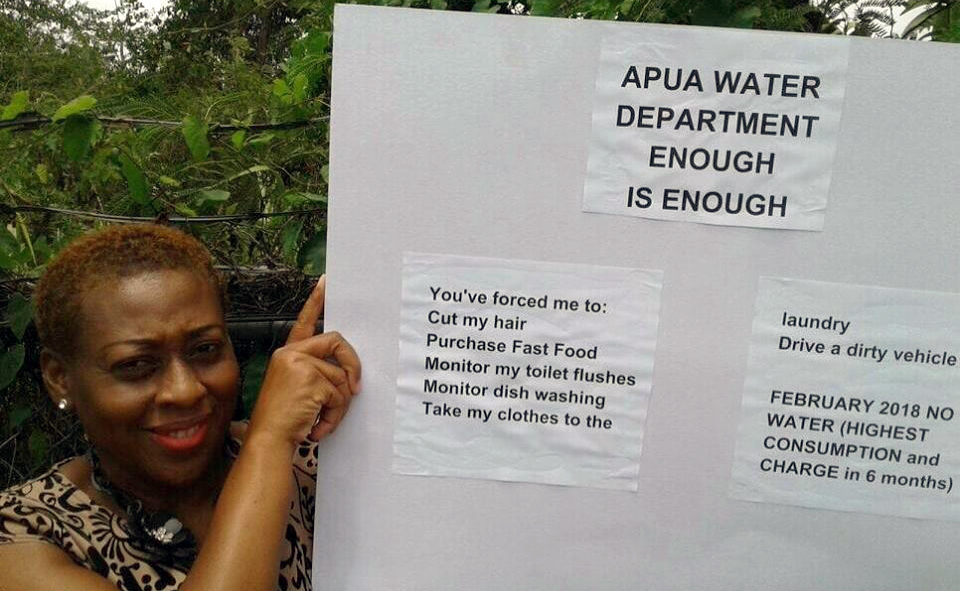 “When I was informed my water bill for June was $50 (no water for 25 DAYS out of 30), I hurried to a stationery store this morning, got the necessary supplies and picketed APUA’s head office.”

“I was quickly approached by a courteous well-mannered gentleman who advised management wished to meet with me,” she continued.

“I left with an understanding of their woes as the provider, but most of all someone cared, my issue mattered and people ARE working behind the scenes to make things better,” the post concluded.

Parker-Baptiste’s post, to date, has since gone on to garner over 180 reactions, 98 shares and 22 shares on Facebook alone, not counting the number of re-posts on other social media outlets.

“Thank you… Why didn’t I think of that… the last time I went there and queried why the bills are higher now we hardly have water the agent tried to convince me that since we have no water we tend to use more by filling up all the bottles and storage items… am there like what.!?” asked one poster to Parker-Baptiste’s page.

“You spoke; you were heard. Very nice that you did not omit to say thanks to APUA for addressing your situation. Thalia, you tallawa,” said another.

Parker-Baptiste replied to many of her posters saying, “Indeed I will escalate. For now I will give management a chance. The Politicians just need to stay away from the media and stop giving false hope. Call a spade a spade and I’ll work with you.”

She also said that, “Having a better understanding of the situation I too expect that the supply will fluctuate, but at least there is some resolution.”

APUA corporate communications officer Anazette Reynolds has confirmed that Parker-Baptiste met with APUA’s acting Water Business Unit manager Ian Lewis, and that she left with a better understanding of the situation at hand.

“We have had an increase of supply from the five reverse osmosis plants on the island and decided to test an open system.”

Reynolds explained that, as a result of the open-system test, that it caused some residents to get a steady supply of water and some to get none at all. Residents on lower-lying areas have been negatively affecting the distribution of those in higher areas. Possible uncertainty of water supply had caused residents to, “Compensate by increasing their consumption by the filling of tanks, cisterns etc. This does not allow for water to get to our customers on the higher levels.”

“Residents living in communities such as Bolands, Urlings, etc. would get fed directly from the Ffryes plant and would have no problem receiving water.”

She explained, however, that, “The R/O plant in Crabbes feeds from Long Bay all the way down to Five Islands, so it becomes a challenge to feed all residents in that large area.”

The APUA spokeswoman also said that the preponderance of sargassum seaweed this year had caused the water unit to change its maintenance schedule for its R/O plants causing it to shut down water supply from the plants to clean the excessive seaweed.

APUA has already begun a pipe retrofitting program to overhaul the damaged and leaking pipes throughout the island which has severely, negatively impacted water distribution.