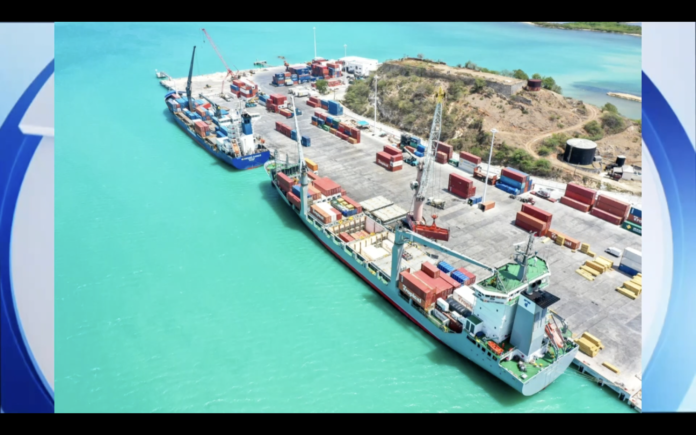 The redevelopment work at the country’s main seaport has been completed.

This is according to Port Manager Darwin Telemaque who made the revelation on state media yesterday.

“Yesterday, I received instructions from my Chairman Senator Mary Claire Hurst who received instructions from the Prime Minister Gaston Browne who advised that it was okay for us to go ahead and sign the document, and yesterday I signed off the completion of works document with the Chinese, who were very anxious to get that as they have been here longer than expected, longer than they planned due to the pandemic.

“We did it, and this is just the first part of the actual celebration of its completion which is the signing of the documents, and the planning begins for a real grand event to celebrate not just the completion, but the actual opening of the new development, the newest port in the Caribbean.

This is welcomed news for many as the US$90 million redevelopment project has been delayed for several years with the biggest issue being the Covid-19 pandemic.

In January 2018, the Antigua and Barbuda government awarded a US$90 million contract to the China Civil Engineering Construction Corporation (CCECC) to construct a cargo port and cruise ship harbour.

A few months later, work began on the Deep Water Harbor port, and years later the port now boasts a new cruise berth, as well as cargo and logistics facilities and other amenities.

Offices were also built to house the Customs and Excise Division, Plant Protection Unit, Immigration and other services that customers accessing the port would generally have to journey to St John’s for, and then return to the Deep Water Harbour.

Telemaque mentioned that with this completion, the hope is to have the port become one of, if not the top, seaport in the region.

He revealed efforts are already being made on their end to increase service and attract more business partners at the port.

“We are going to work very aggressively to attract the players that can bring more business to Antigua, specifically to the Antigua Port Authority. Tropical is one such customer that we are lobbying and working hard with them. The prime minister is also working aggressively to assist us as well, and has approved some support for us to get a brand-new crane.

“We also at the port have made some advancement towards that also. The excitement now is that we have a brand-new gift and now is the time to open the box and make the gift actually work, and that means getting the digitalisation right, getting the staffing right, getting the equipment right, putting it all together and make something beautiful happen for Antigua and Barbuda, and even the region” he added.

A major ceremony will be held to commemorate the occasion. An official date for that event has not yet been finalised. (OBSERVERNEWSCO)