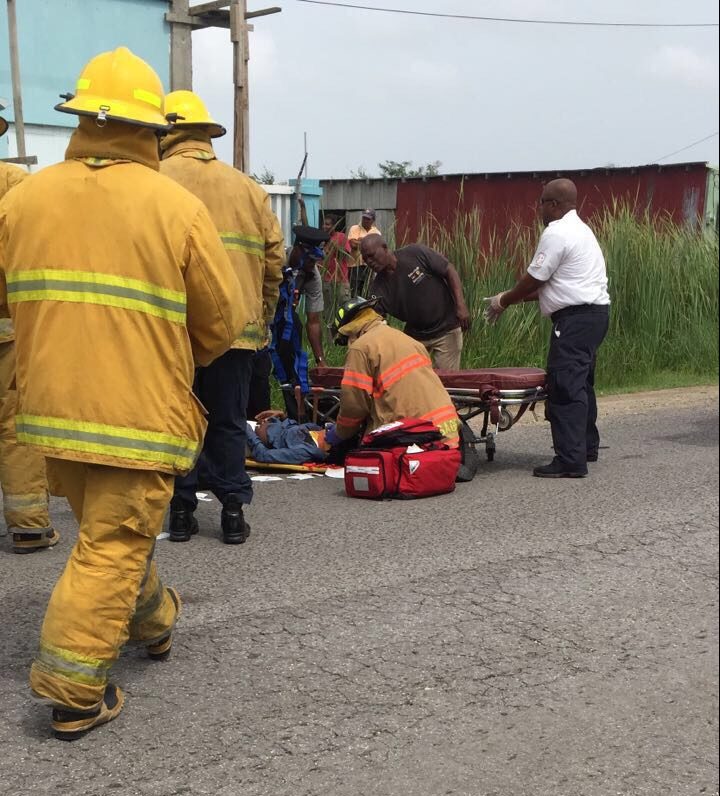 The police are making an impassioned plea to motorists to drive with caution on the nation’s roadways as a man lays in an unresponsive state in the Intensive Care Unit (ICU) at Mount St John’s Medical Centre (MSJMC) following a road collision this morning.

Antigua News Room (ANR) understands that the driver who caused the accident fled the scene, but turned himself in two hours later.

Deshawn Mayers, 32, remains in custody assisting lawmen with investigations into the collision.

Reports are that three trucks were travelling from north to south on Sir George Walter Highway when two of the trucks came to a standstill in the vicinity of D Zone (a business which sells car parts), and the third truck attempted to pass them.

While attempting to make the maneuver, the truck moved into the lane of oncoming vehicles travelling in the opposite direction.

The driver of a Honda motorcar swerved to avoid an impact with the oncoming truck, which was packed with stones, but was clipped by the truck’s wheel.

Reports are that the car spun out of control and the truck turned onto its side and all its contents fell on the road. 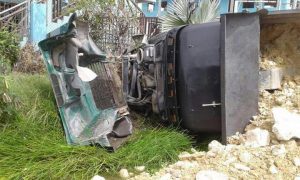 Three people were in the car and had to be rushed to the hospital where the driver has not been responsive to treatment and his two female passengers (mother and daughter) had to undergo surgery. The younger female received a laceration to her left ear area, the police said.

Assistant Commissioner and Head of the Traffic Department Leonard Cabral is appealing to drivers to be more careful on the country’s roads.

Cabral is also concerned that people are not wearing seatbelts, which is against the law.

He said some of the injuries sustained by the victims this morning could have been avoided if they were buckled up.

“We are still appealing to motorists, especially the young, the driver of the truck is 32 years so he is in the bracket that we (rate them) as more dangerous, from 18 to 35. We just want to encourage them to stop the speeding. The truck was filled with stones so imagine the weight of that truck.

“We want to encourage drivers too, please put on your seatbelts; some of the injuries the passengers sustained, they were not belted and some of those injuries could have been avoided,” Assistant Commissioner Cabral said.

Cabral is calling on parents to speak to their children about road safety and the dangers speeding posed to their own lives and that of others, both pedestrians and motorists.

“We want to encourage the drivers to please stop the speeding on the motorways, stop the speeding. Even the slowest driving gets you anywhere in Antigua. We are appealing to them to stop speeding, drive within the speed limit of Antigua and Barbuda.

“We want to encourage the parents too to talk to their children because some of these children have died in parents’ vehicles, encourage them to wear their seatbelts and stop the speeding and do not drink and drive,” Cabral concluded.