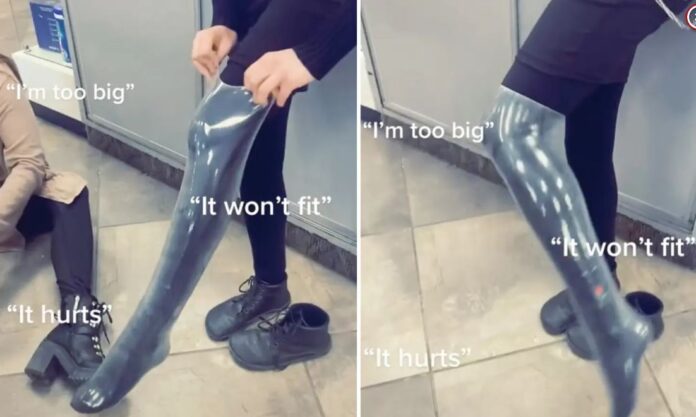 This woman is proving men don’t have a leg to stand on when it comes to getting out of wearing a condom. CLICK HERE TO JOIN OUR WHATSAPP GROUP.

The sex shop employee shamed delusional condom shunners online by stretching a rubber over her leg to prove that no man is “too big” to wear one. A video of her unconventional prophylactic PSA currently boasts 15 million views on TikTok.

“What a fancy thigh-high, right?” reads the caption to the clip, which was uploaded last week by an unnamed adult store manager who goes by @theel_inloser on TikTok.

The 30-second sex ed tutorial shows the poster’s employee Jo Jordan impressively rolling a condom up over her foot, knee and thigh like a latex legging. Her apparent goal, per the captions, was to shame males with magnum-sized egos who claim that their penis is “too big” or that the rubber “won’t fit.”

Ironically, a 2017 study found that many men shun rubbers because they think their penis is too small, rather than too large, for the condom. Other excuses for going condom-free, per surveys, range from the claim that jimmies numb sensation during intercourse and that they make the wearer feel unsexy.

Needless to say, the demonstration struck a chord with commenters with one writing, “It was very difficult not to laugh at men that said this when I worked at an adult store.”

Another posited that many men “just don’t wanna wear one so they lie” about their size.

However, some naysayers accused the sex shop worker of employing an “extra-large” condom that would fit over her foot. 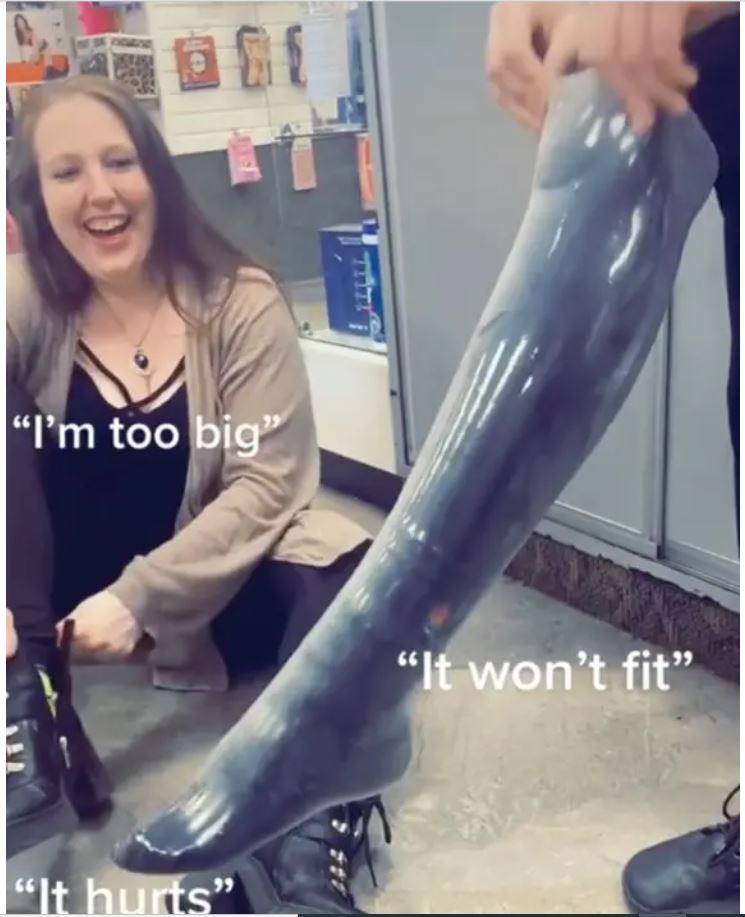 The video poster dismissed critics in a subsequent clip, arguing that they’d just grabbed the nearest condom. Although they made sure it was non-lubricated as “no one wants lubricant on their foot,” she mused on camera.

The magnum merchant found the “too big” excuse particularly ludicrous as the average penis measures between 5.1 and 5.5 inches long — over an inch shorter than the average starting condom size at 6.7 inches. Meanwhile, large sizes range from 7.5 to 8.1 inches.

“I think you’re fine, and if you’re not in that average range, cause you know it exists, that’s when you go up a size,” the sexpert suggested.
Promoting protection is vital as young people increasingly neglect to don rubbers during sex. A 2015 CDC study found that condom use among sexually active high schoolers dropped from 63 percent in 2003 to 57 percent in 2015. A study that same year by Skyn condoms found that 48 percent of millennials use condoms “never” or “rarely.”