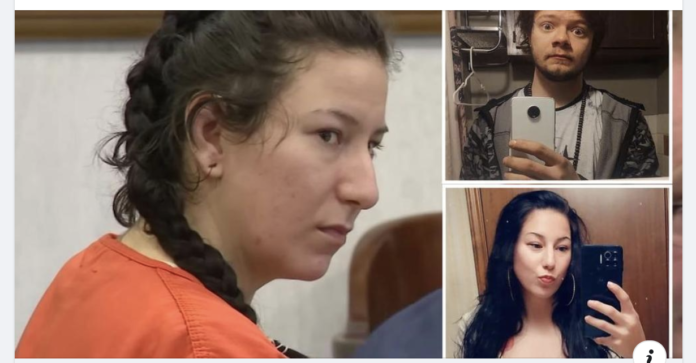 A Wisconsin woman accused of decapitating her lover during sex and then stuffing his severed head and penis into a bucket has pleaded not guilty to the twisted romp.

A criminal complaint accused Schabusiness of strangling 25-year-old Shad Thyrion to death in February at a Green Bay home, sexually abusing his lifeless body and then mutilating the corpse with a serrated bread knife.

A warrant was issued for Schabusiness’ arrest for violating the conditions of her release, but she wasn’t located until after the grisly murder was uncovered.

Police were called to a home on Stony Brook Lane in Green Bay on Feb. 23 by a woman who reported finding her son’s severed head in a bucket.

Officers who responded also found a “male organ” in the bucket, an upper torso in a storage tote, “body fluid” and knives.”

When police tracked down Schabusiness at another location, she was found with dried blood on her clothes, according to the complaint.

During a search of her van, cops discovered a crockpot containing human remains, including legs.

Under questioning, Schabusiness allegedly said “that the police were going to have fun trying to find all of the organs.”

The 24-year-old told detectives that she and Thyrion had been smoking methamphetamine before going to his mother’s house to have sex using chains.

Schabusiness claimed that at one point, she had blacked out, after which she went “crazy” and proceeded to strangle Thyrion. She insisted that she did not mean to kill the man but enjoyed choking him, the complaint stated.

Schabusiness also volunteered the information that of all the knives she allegedly used in the dismemberment, the bread knife “worked the best because of the serrated blade.”

She explained that she planned on taking all the body parts with her but “got lazy and only ended up putting the leg/foot in the van and she forgot the head,” according to the complaint.

Schabusiness’ defense lawyer previously said she has been struggling with mental health issues from the time she was in the seventh grade, and that she has been diagnosed with bipolar disorder.