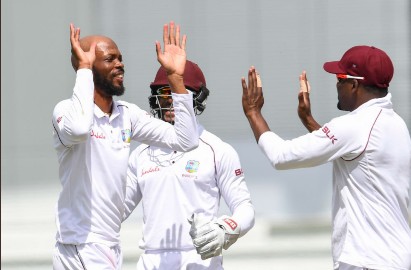 West Indies crushed hapless England by 381 runs inside four days here Saturday, to win the opening Test at Kensington Oval and take a shock 1-0 lead in the three-Test series.

Off-spinner Roston Chase snatched a career-best eight for 60 as England, chasing an improbable 628 for victory, crumbled meekly for 246, three quarters of an hour after tea.

Left-handed opener Rory Burns top-scored with 84, all-rounder Ben Stokes chipped in with 34 and Jonny Bairstow got 30, but England never came to grips with Chase, especially after lunch when they lost four critical wickets.

The day had started brightly when Burns and Keaton Jennings (14) put on 85 for the opening stand before Burns added another 49 for the second wicket with Bairstow.

But Burns perished to the penultimate ball before lunch to change the momentum of the morning, giving West Indies the opening they wanted.

Shannon Gabriel claimed Bairstow in the third over following the interval and the key wickets of captain Joe Root (22) and Stokes followed as England slid to 217 for six at tea.

Chase then took all four wickets in the final session to hands West Indies their second largest win ever against England.