Pollster Peter Wickham is predicting that if an early election is called, All Saints East and St Luke Member of Parliament Joanne Massiah will not retain her seat.

Wickham said, while he is not able to release the details of the community polling that he has conducted, “the reading suggests that she (Massiah) is unlikely to win.” He said the main fight will be between the Antigua Barbuda Labour Party (ABLP) represented by Colin James and the United Progressive Party’s (UPP) Jamale Pringle. 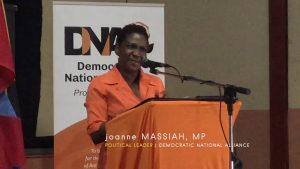 The now Democratic National Alliance (DNA) leader won the UPP stronghold seat in the 2014 general election on the UPP’s ticket, which made her one of three Opposition Members of Parliament. After near two years of internal wranglings, Massiah left the UPP to form her own party, which was launched in 2017.

Wickham, who believes the DNA leader would have been better off staying with the UPP, said that while both Massiah and her party have increased their popularity since they were launched, “the increase is not at a rate that would suggest that you get to the finishing line in time for the next election.”

He said, however, that the results from his recently conducted poll suggests that Massiah has been able to chip away support from the UPP and while Massiah may be able to marshal more support overtime, it may not be in time for the next election.

The pollster and political analyst said while he believes Massiah’s return to the UPP would strengthen both parties “substantially,” he does not think the public should expect this to happen and if it does, it will definitely not be before the next election.