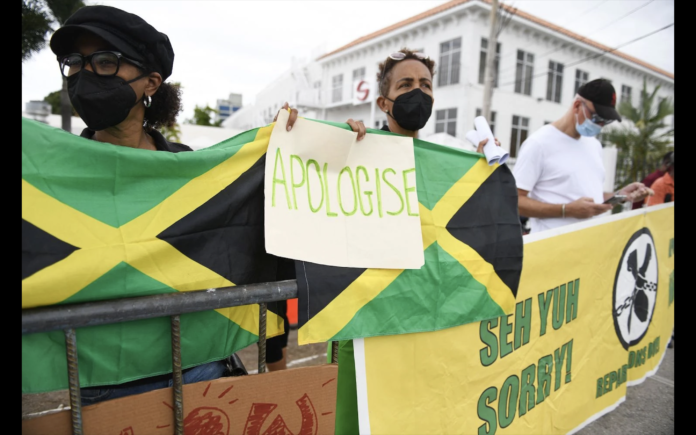 FP:Officials in at least six countries in the Caribbean where Britain’s Queen Elizabeth II is head of state have signaled they intend to remove the monarch as their sovereign. These countries follow Barbados, which removed the queen as its head of state to become the region’s newest republic in November 2021.

The calls, made over the course of the past two months, have come as members of the British royal family made two separate trips to the Caribbean this year, drawing protests at every stop. Prince Edward and Sophie, the Countess of Wessex, will wrap up their leg of a six-day Caribbean trip Thursday after visiting Antigua and Barbuda, St. Lucia, and St. Vincent and the Grenadines. A planned stop in Grenada was postponed, Buckingham Palace said in a statement. Prince William and Kate, the  Duchess of Cambridge, visited Belize, Jamaica, and the Bahamas in March.

Local protesters in Belize and Jamaica called for a formal apology by the royals for their family’s role in the enslavement and brutalization of Africans and demanded reparations. An official has been appointed to oversee the process of decoupling in Jamaica, reported the Guardian, and the prime minister of Antigua and Barbuda, Gaston Browne, told Edward and Sophie in a meeting that his country intended to become a republic “one day.”

Why is the queen the head of state of these countries?

All six Caribbean countries that have indicated they plan to remove the queen as their head of state—Belize, the Bahamas, Jamaica, Grenada, Antigua and Barbuda, and St. Kitts and Nevis—were colonized by the British. But when each nation gained independence from Britain during the second half of the 20th century, Elizabeth retained her post as sovereign, and each country remained a member of the Commonwealth, a grouping of 54 former British colonies.

There are 14 countries outside of the United Kingdom where the queen is head of state: Antigua and Barbuda, Australia, the Bahamas, Belize, Canada, Grenada, Jamaica, New Zealand, Papua New Guinea, Solomon Islands, St. Kitts and Nevis, St. Lucia, St. Vincent and the Grenadines, and Tuvalu. In these countries, known as Commonwealth realms, the queen appoints a representative—such as a governor general—recommended by the popularly elected leader, such as the prime minister or president.

Countries that are members of the Commonwealth—but are not Commonwealth realms—do not have the queen as their monarch, electing a head of state from among their own people.

All former British colonies-turned-republics, including Barbados, are still members of the Commonwealth. The Commonwealth does not make laws but provides trade links between countries and, in some cases, a foundation for resolving disputes. While a majority of member countries have historical ties to the British Empire, the last two countries to join, Mozambique and Rwanda, never experienced British colonial rule. (ForeignPolicy.com)