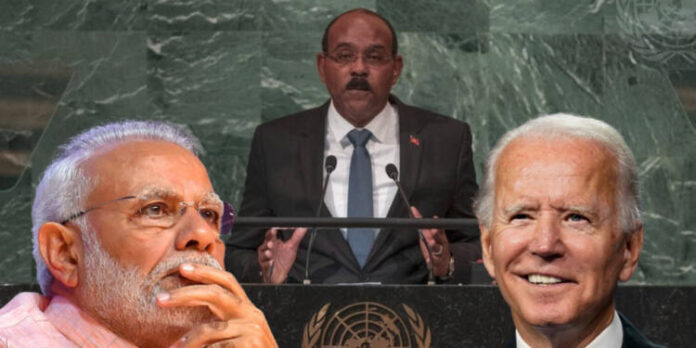 But it looks like PM Gaston Browne has just demanded India to pay up for the loss and damages caused by the US and European nations. As per what Al Jazeera stated regarding these developments, PM Gaston Browne mentioned the countries paying for the damages through payment of Global Carbon Tax.

What loss and damages has India caused to it?

But, Gaston’s blame on India and his expectation from India are highly misplaced. How? Let’s understand.

Why is India on Browne’s Climate Hitlist?

It seems that PM Brown is actually frustrated with the west over the climate crisis, but he is shedding it out against developing countries like India and China. Outraged PM Gaston Browne targeted India for an entire climatic impasse, where the elephant wasn’t given a toss.

Gaston Browne even asked New Delhi to come and support countries in rebuilding economies that are damaged by disasters. He asked for compensation and aid. All this is ok when you do not blame countries like India which have provided continuous assistance, instead you reprimand them and ask for money.

Initially, only the US, UK and some EU members were held accountable for climate change-related ramifications and adverse impacts but this time even India has been put in the same boat. That came as a surprise because India is still a developing country and it is essential for her to use her resources properly in order to become a developed nation. In spite of her challenges, she still assisted the CARICOM countries.

Henceforth, it is essential for the countries to understand India’s goodwill gesture and reciprocate in return. During desperate times amidst the Covid pandemic, India provided Rs.160 million of medical assistance to these island countries.

New Delhi even assisted Antigua in the development of a hospital. USD$ 10 million of solar energy projects has also been provided to Saint John’s along with assistance through the International Solar Alliance. In 2019, India committed to providing a grant of USD$ 14 million for community development and 150 million lines of credit for solar and renewable energy.

During the 4th India-CARICOM Foreign Ministers meeting, New Delhi committed to providing support to CARICOM countries in multidimensional fields such as IT, and pharmaceuticals. But what has New Delhi got in return? Thrashing?

Even though challenges pertaining to climate change have created impacts on ecological balance but coming to India, it has already done tremendously well in promoting green and sustainable energy through the promotion of wind, and solar power.

India has tried its best in combatting climate change in spite of being a poverty and hunger-ridden country for decades. According to a BBC report, 33 per cent of the carbon emissions came from China, 13 per cent from the US and surprisingly, only 7 per cent from India. When the world was struggling with the virus, India’s share of energy coming from renewable resources reached 3 per cent and 175 gigawatts of renewable energy aims to be installed by 2022.

PM Brown should understand India’s stance and situation and come out of his misplaced priorities. He should develop a clear understanding of who’s the villain and who is not, based on the facts and initiatives. The facts suggest that the West was and is a larger emitter and the West should be considered the main enemy, not the countries from the East, especially India.