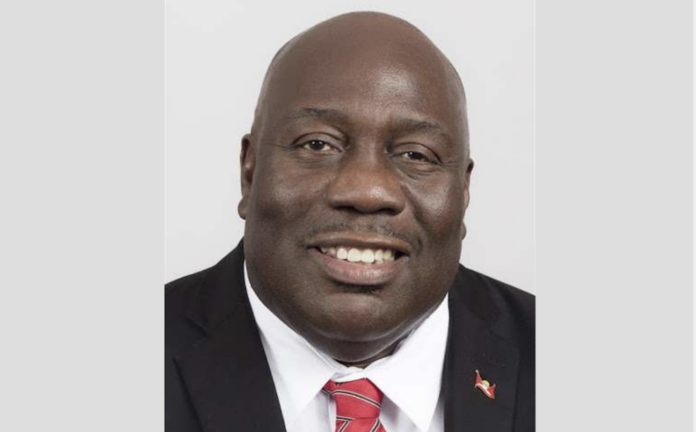 A government minister in  Antigua and Barbuda linked Barbados to what he described as attempts to steal LIAT or destroy the regional airline.

In a scathing address to the Parliament in John’s on Thursday, Minister of State in the Ministry of Finance and Corporate Governance Lennox Weston, while not naming Barbados directly, made references to Prime Minister Mia Mottley and her Government, a majority shareholder in LIAT.

Minister Weston said there was a plan to takeover LIAT or to destroy it at a meeting in Barbados to discuss the relocation of the headquarters to St Vincent and the Grenadines – another shareholder territory.

Describing the previous Antigua and Barbuda government of being too soft, he recalled that his administration has always said that the plan was to steal LIAT “and if they failed, to destroy LIAT”.

“LIAT wasn’t destroyed just by any act of COVID, LIAT was destroyed by a deliberate attempt to either take over or destroy,” he claimed.

Weston read from a memorandum dated March 23, 2019 which indicated that a team from the Eastern Caribbean Civil Aviation Authority (ECCA) met with the legal counsel for LIAT who notified ECCA that the airline was considering relocating its headquarters from St John’s to Kingstown and sought information on change of location.

“During the meeting, the lawyer of LIAT invited ECCA officials to attend a meeting in Barbados to discuss the legal matters pertaining to LIAT. The team accepted and they journeyed to Barbados and they met with the Government headed by the Prime Minister of Barbados to discuss LIAT,” the minister added.

He said that after welcoming remarks, the lawyer announced that consideration was being given to relocating the headquarters of the airline to St Vincent and the Grenadines, “but due to certain legal implications, it was decided to opt for Barbados instead.”

“Let me go slowly,” he told Parliament, “because some of you are so naïve…so naïve…’oh I love Mia, she robust and strong.’ She love Barbados, she ain’t love yuh’all,” Weston declared.

Continuing to read from the memo he added: “According to the discussions, the ECCA team understood that a new LIAT would be established, with the name of LIAT 2020 and it would be relocated in Barbados. The lawyer advised that it would be best for Barbados to establish a civil aviation authority.

“They want to huff ECCA…So we don’t have a civil aviation authority and carry it to Barbados.”

“You all think we must be nice and smile and talk nice to them as if we be fooly? Mr Speaker, the Prime Minister of Barbados then instructed the Minister of Civil Aviation within the shortest possible time…by the weekend. A prime minister who is not even part of ECCA directing ECCA which is a sub-regional organisation…’I say kill the civil aviation authority in Antigua…form the one in Barbados in two days,” the Antigua minister told his legislative assembly.

“We is slaves…how long slavery finished…We are an independent country. We must not stand up and fight?” he asked.

Weston said when that failed because the Antigua Prime Minister and the directors of LIAT rejected the notion, “they used their majority position and their management, not only to bankrupt LIAT but to try to liquidate it. Straight up…straight up. Seven hundred workers.

“If we had shared the burden, it would not have cost us as much as an urr….yes per month to get LIAT back in the sky. But it is my way or the highway. We are out to destroy Antigua and Barbuda because some of its citizens so hate the government and so hate themselves, they would even join with a foreign leader to destroy their own country.

“We know from looking at the accounts of LIAT that the real problem was too much of a captain running the ship and people who were there to destroy LIAT because they felt Antigua was benefiting from LIAT. And you know when you are righteous and you doing the right thing, God bless you,” he suggested.

Weston praised his government’s ability, commitment and fortitude in getting LIAT back in the air against the odds, while lashing out at Barbados’ intellectual capacity and the performance of the economy.

He also pointed out that Barbados had been given an economic stimulus in the early stages of the new Barbados Labour Party (BLP) Administration.

“Some people say ‘oh Barbados get stimulus.’ The first day that the government got into office, how many public servants they sent home…how much we sent home?

“So Mr Speaker, those who seek to prosper by destroying their fellow CARICOM operations, industries; who even put Caribbean people and workers in harm’s way, we ask them to cease and desist. But we wont argue because the best revenge is to succeed. And we will succeed…and we know LIAT will be a profit centre as soon as COVID is over and the people start to travel,” Weston told Parliament.

He gave the assurance that LIAT will be operated in a sensible way and “make plenty money” even as it is used as a feed airline linking international travel. He said the airline will also provide a cargo service regionally and globally. — Barbados TODAY