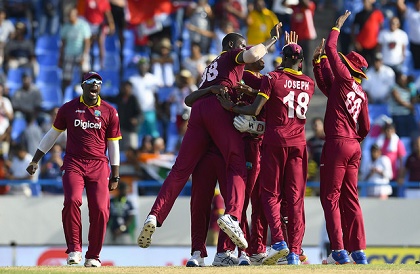 West Indies head coach Stuart Law has hailed Sunday’s sensational win over India but cautioned it was just one step on a long road back for the embattled Caribbean side.

The Windies looked down and out when they stumbled to 189 for nine off their 50 overs batting first in the fourth One-Day International but rallied to bundle out the Indians for 178 and clinch an amazing 11-run victory.

“I believe in these boys. I believe they have got the skill,” the Australian told reporters following the result at the Vivian Richards Cricket Stadium.

“We beat Pakistan a couple of weeks ago chasing down 300 and now we’ve defended a reasonably small total against India – two of the best teams in the world we’ve gone on to beat.

He added: “Today is one step and it’s a big ladder for us but today is one step closer to where we want to end up. It’s a lot of hard work and we are working hard, believe me.

“The people of the Caribbean probably don’t see us working as hard as we are and I just want to let them know that we are very pleased that we’ve put a win on the board today for everybody in the region.”

Entering the contest down 2-0 in the five-match series and trying to avoid yet another series defeat, West Indies produced yet another limp effort with the bat as their batsmen succumbed to a series of soft dismissals.

Openers Kyle Hope and Evin Lewis top-scored with 35 but no other batsman passed 30, as the Windies innings declined dramatically from a decent position of 121 for two.

Law said while it was evident the batting still needed work, he was thrilled by the way the team had rallied especially defending such a small target.

“We showed tremendous fight with the ball in hand out there today,” Law pointed out.

“Once again our batting [was not up to scratch]. We got off to a good start but we didn’t quite capitalise. We desperately need one of the top six or couples of the top six to go on and get big scores to alleviate the pressure that we had at the end there.

“If we had 240, 250 on the board it would have made our job a lot easier but credit to the boys. The way they fought in the field. I thought the fielding was outstanding, the pressure catching towards the end was great.

“I’m very happy, very proud but we’ve still got plenty of work to do but we’re definitely going to enjoy this one.”

The final match of the series is set for Sabina Park in Jamaica on Thursday.