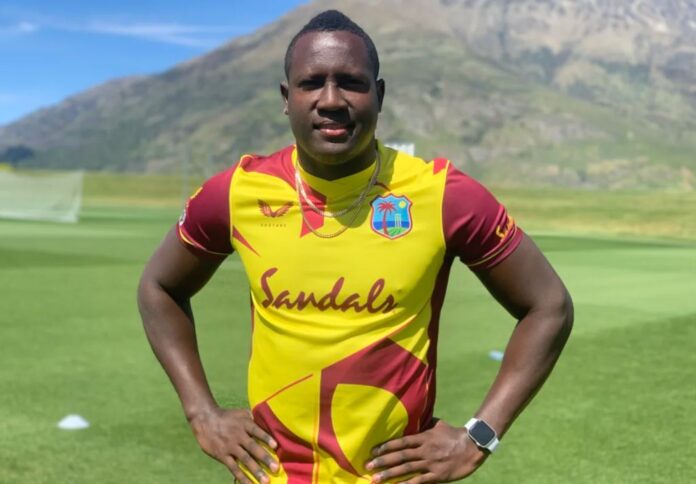 The T20I shirt features an eye-catching, contemporary maroon and yellow geometric pattern on the shirt front, with contrast maroon sleeves.

The bold, vibrant colours and design are a trademark of the #MenInMaroon, one of the most successful, exciting and skillful teams in world cricket.

The playing shirts are made with a premium, lightweight performance stretch fabric and are available in both short sleeve and long sleeve versions.

The new playing jersey has already sparked great interest among fans who first saw it on West Indies’ social media channels and it completes the new range of West Indies playing and training kits designed by official team kit supplier, Castore, available to buy immediately through the Castore website.

The T20I shirt will be worn for all T20I matches in the build-up to the ICC T20 World Cup and in all West Indies Women’s T20I matches. West Indies are the defending and two-time men’s T20 World Champions, having won World Cups in 2012 in Sri Lanka and again in 2016 in India.

Dominic Warne, CWI’s Commercial Director, said: “We’re really excited for the new T20I shirt to debut with the West Indies Men’s team in New Zealand on the road to the ICC T20 World Cup. We know that fans will love the bold design and rally behind the #MenInMaroon for this Series and throughout 2021.

Castore have created a superb range of playing and training gear that have been in demand since launching prior to the Sandals Tour of England 2020 and we expect to see great demand from West Indies fans, the most passionate cricket fans in the world.”

Pascal Lafitte, Head of Team Partnership at Castore added: “We are thrilled to be revealing the new T20I shirt to West Indies fans.

The kit shows Castore’s desire to be different with audacious designs, and this is testimony of all the hard work that has gone on behind the scenes to make it a success. We can’t wait to watch the West Indies put it through the paces in New Zealand over the coming weeks.”