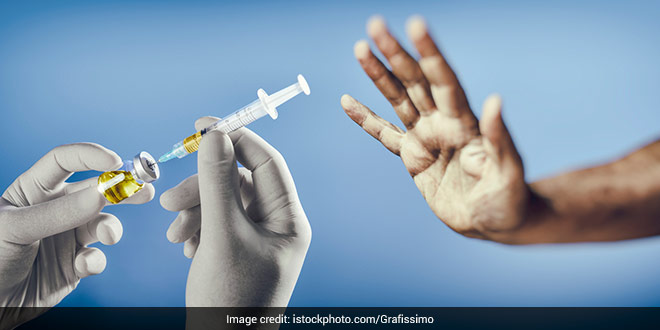 News Americas, NEW YORK, NY, Fri. Aug. 13, 2021: While Caribbean countries grapple with a spike in new COVID-19 infections and governments beg for vaccine donations, anti-vaxxers and those long skeptical of vaccines are taking to the streets across several countries in the region in heated protests against any mandatory vaccination policies.

Protests have now been held in St. Vincent and the Grenadines, Antigua & Barbuda, Barbados, Guadeloupe and Saint Martin.

The protest action began in St. Vincent and the Grenadines on August 5th and turned violent, leaving the country’s prime minister injured and concussed.

Last Thursday’s protest was organized by unions representing nurses, police and other workers who fear COVID-19 vaccinations could be mandated for some employees by the government, according to reports and videos on social media.

Gonsalves, 74, was hit by a break in his head as he walked through a group of about 200 protesters to get into parliament. Video footage following the attack showed a dazed Gonsalves, his white shirt turning red as blood streaked down. Security guards rushed him from the scene, and he was later flown to nearby Barbados for medical care. A woman has been arrested with attacking the prime minister but she has insisted she is innocent.

On August 7th, activist Winston Clarke, a Rastafarian group and the Nation of Islam hosted a march in Barbados in response to plans by the Mia Mottley administration for possible mandated COVID-19 vaccinations among frontline workers.

While members of the Social Partnership at large have expressed their support for regular testing and vaccinations, the topic of vaccine mandates has seen push back from a vocal sections of society. “What we are doing is bringing focus to the changes that are coming to the people, and our hope and nothing else is to educate the public. This is not a protest against the Government, this is not anti-anything, we are pro-life, and because we are pro-life, we are taking the choice to preserve life,” he was quoted by Barbados Today as saying.

On August 8th, a group calling itself Freedom Fighters for Antigua and Barbuda, held a protest against mandatory vaccines for front line workers.

Police there arrested two and said they had to use teargas to break up the demonstration.

On August 8th as well, people in the French Caribbean territory of Guadeloupe marched during what they called a National Day Of Protest against the compulsory COVID-19 vaccination for certain workers and the mandatory use of the health pass called for by the French government.

Protesters carried signs that read “Respect My Body – Don’t Force Me To Be Vaccinated;” “No, No And No, We Are Not Guinea Pigs. We Do Not Vaccinate Under Duress. No, No One, No Power, No Law Will Deprive Us, Will Dismiss Us For The Vaccine;” and “We Are No Longer Under The Whips Of The Executioner. We Do Not Want An Apartheid In Guadeloupe.” Other signs read: “Means And Treatments To Care And Support – Individual Freedom Face To RNA-Based Clinical Trials;” “Freedom” and “Leave Us In Peace.”

The march came as France’s health minister on Sunday appealed for volunteer doctors and nurses to travel to the overseas territories of Guadalupe and Martinique as a wave of COVID-19 infections overwhelms hospitals on the two Caribbean islands.

There are over 21,000 active COVID-19 cases in Guadeloupe and over 22,000 in Martinique as the French Caribbean see a new spike in cases. French Guiana has over 20,000 active cases.

In Saint Martin, a second protest against mandatory vaccinations and the health pass implemented by President of the Republic Emmanuel Macron is set to go ahead on Saturday, August 14th.

Jean-Barry Hodge, the protest’s organizer, told the Daily Herald: “We are fighting for freedom of choice, no mandatory vaccinations, no health pass.”

The French government’s health pass came into effect in France on august 9th, but the Préfet of Saint Martin and St. Barths has not implemented the measure so far in the two islands.

In Sint Marteen, a similar protest is set for today, Friday August 13th at 7 a.m. outside the government building. Nigel Emmanuel David of Soualiga Defence, an organizer for the protest on the Dutch side said they are also against mandatory vaccinations.

The United States finally this week sent some COVID-19 vaccine donations to six more Caribbean nations which have been begging for help since last year.

The US sent 837,000 vaccine doses to the six CARICOM countries of Trinidad and Tobago, the Bahamas, Antigua and Barbuda, Barbados, St. Kitts-Nevis and St. Vincent and the Grenadines.

Overall, the United States is donating 5.5 million Pfizer vaccine doses along with ancillary kits to the 15 member countries of the Caribbean Community (CARICOM). This week’s deliveries are the first tranche of our 5.5 million dose commitment to all 15 CARICOM member countries, the US State Department said Thursday.

In this round, according to an official statement, Washington will send 305,370 doses of the Pfizer vaccine to the twin island Republic of Trinidad and Tobago.

A News Americas analysis shows the region has received only a small percentage of vaccines to date compared to its population size. An analysis of recent PAHO vaccination data for the Americas show that so far, only 7.4 million out of a total population of 31.2 million in 32 Caribbean countries have been fully vaccinated to date.

And a NAAN analysis of GAVI and other data released shows the Caribbean has so far received just over 1.6 million AstraZeneca/Oxford COVID-19 vaccines under the COVAX sharing scheme for poorer countries, new data shows. That’s for a region that is home to over 40 million people.

Dr. Carissa Etienne, director of the Pan American Health Organization, the WHO’s regional branch in Latin America, said the abundance of vaccine misinformation in the island region is making people hesitant to get the shots.

Etienne said the decision not to get vaccinated is “foolhardy,” especially when hospital capacity is so limited.

“I want to make a special appeal to my fellow Caribbean persons please, we have to be extremely careful,” she added. “We have limited bed capacity and limited ICU capacity in our small islands … our health systems will become overwhelmed very quickly.”

“Overall, the main ingredients in the Pfizer-BioNTech and Moderna vaccines are very similar, and all three vaccines were found to be safe and efficacious in preventing symptomatic COVID-19 disease in rigorously conducted clinical trials. These COVID-19 vaccines are safe and went through the same rigorous testing process as other vaccines before being approved for emergent use in the United States. Although local and systemic side effects have been reported, as is the case for many other medical interventions, the risk of lacking protection against COVID-19 and developing severe disease far exceeds those posed by the vaccine itself. ” says Juan Ravell, M.D., division chief of allergy and immunology at Hackensack University Medical Center. “These ingredients are safe and the development of these COVID-19 vaccines marks a huge step towards acquiring herd immunity and the end of this pandemic.”

The ingredients for the three vaccines that have been granted Emergency Use Authorization (EUA) from the U.S. Food and Drug Administration (FDA) since mid-December 2020. are as follows:

The Pfizer-BioNTech COVID-19 vaccine is made of the following ingredients:

There are rumors that mRNA vaccines will alter our DNA because the RNA molecule can convert information stored in DNA into proteins. That’s simply, not true. It’s critical to note that the mRNA vaccines never enter the nucleus of the cell, where our DNA is stored. After injection, the mRNA from the vaccine is released into the cytoplasm of the cells. Once the viral protein is made and on the surface of the cell, mRNA is broken down and the body permanently gets rid of it, therefore making it impossible to change our DNA.

The Moderna COVID-19 Vaccine is made of the following ingredients:

The remaining ingredients (below), including acids, acid stabilizers, salt and sugar all work together to maintain the stability of the vaccine after it’s produced.

The Johnson & Johnson Janssen COVID-19 Vaccine is made of the following ingredients:

The Adenovirus 26 in the J&J vaccine does not replicate, and like the mRNA vaccines, does not change our genetic code.