Lawmen have arrested a Desouza Road man who was caught on camera the night before allegedly stealing a bicycle.

Security officers working the monitor room at the Mount St. John’s Medical Centre saw the man take off with the bicycle.

And since he’s known to them, the guards alerted the police to where the man lives.

The police not only recovered the bicycle from him but also seized a quantity of weed and an imitation firearm.

It is not certain whether charges have been filed. 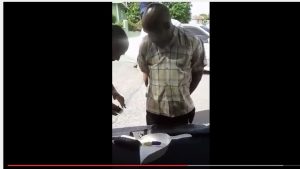