After several hours of negotiation between Barbuda Representative Trevor Walker, members of the Barbuda Council and Chief Fisheries Officer Cheryl Appleton, it has been decided the council will remain in possession of the keys the Fisheries Complex.

Early this morning, the Chief Fisheries Officer arrived in Barbuda accompanied by police dressed in riot gear and armed with machine guns. Her intent was to negotiate the turnover of keys to the Fisheries Complex and establish the working relationship with the council going forward.

When she arrived, however, her contingent met the complex surrounded by scores of Barbudans who had already formed a chain and a blockade around the fisheries building refusing to be moved by police or government officials.

While tensions flared on the outside, however, talks continued for what seemed like “forever” according to one Barbudan protestor. 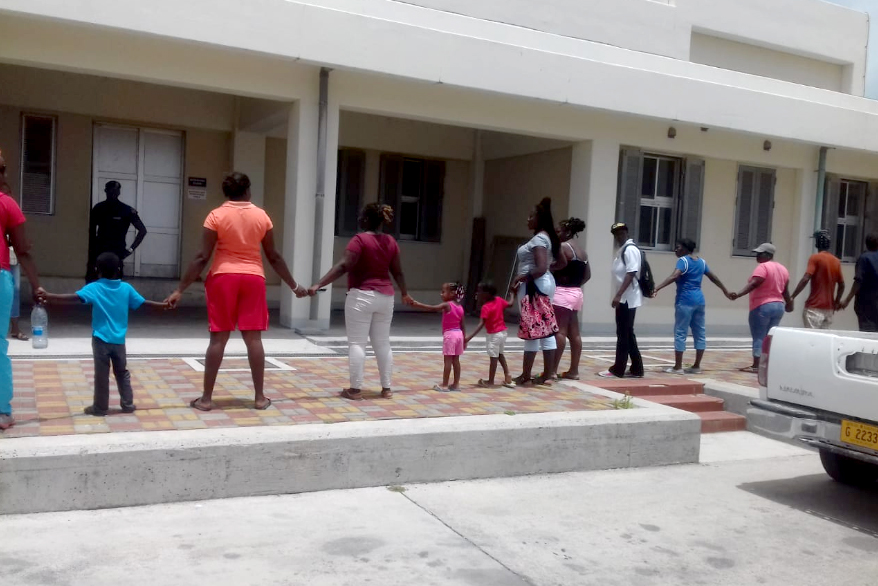 “We’ve worked out several issues, that the keys for the Barbuda remains with the Barbuda Council,” announced Walker to the joyous crowd.

“It has been a long morning. A lot of things happened this morning that were unfortunate.”

“We have to work with Ms. Appleton… we have to. It is incumbent upon us if we want to maintain access to the EU market and have our standardize facilities be approved.”

“We have also given her the commitment to cooperate in whatever other avenues necessary, and she has also pledged to do the same. And basically [she] apologized for what was, in review, an unnecessary situation.”

The building had been used to house the police officers stationed there on the island, and Walker explained that the expectation was to have them out of the facility before the start of the lobster season.

The housing issue, however, was that, “The operational place where they’re gonna have the station, it doesn’t have any electricity as yet. We were promised by APUA that, by today, the building will have electricity. We’ve commitment from [the police] that are on the ground, that as soon as that is done, they’ll be able to move.”