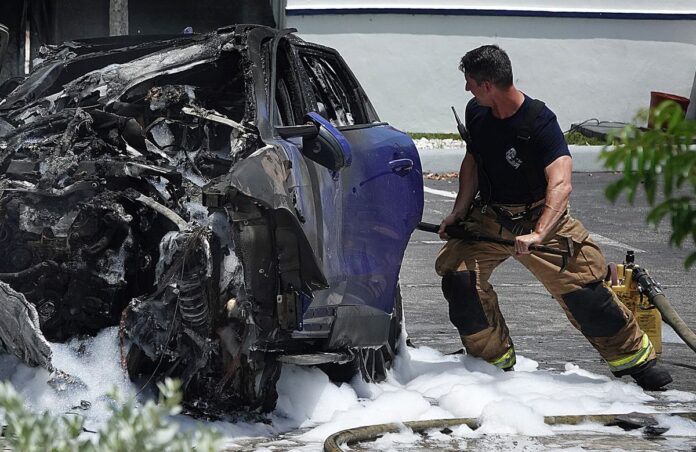 Surveillance video captured the moments a car crashed into a pole in Dania Beach, and the heroic efforts of good Samaritans that saved lives moments before first responders arrived.

It was late Monday afternoon when a blue Jaguar SUV slammed into a concrete light pole on Griffin Road near Anglers Avenue.

The driver and two passengers, including a 6-year-old girl, were trapped inside.

After about 20 seconds, the SUV went up in flames. It was another 60 seconds before a driver stopped and tried to help.

Eventually a man arrives with a step ladder and tried to break open a window.

He’s unable to, but then another good Samaritan grabbed the ladder, broke the back window and opened the door.

That man pulled out a 20-year-old woman and the 6-year-old girl, saving their lives.

The two were pulled to safety as a nearby worker with a fire extinguisher tried to put out the flames.

When first responders arrived, the woman and little girl were on the ground, knowing their loved one was unable to make it out alive.

According to the Broward Sheriff’s Office, the surviving victims were rushed to the hospital with severe burns and broken bones.

While the crash forced the lanes of traffic to be shut down for hours, investigators are now trying to obtain more video from nearby businesses with hopes it can explain what caused that driver to lose control.

The good Samaritan who arrived with the fire extinguisher spoke off camera to Local 10 News’ Roy Ramos.

He was extremely shaken up and very upset by the fact that they were unable to pull everyone to safety.