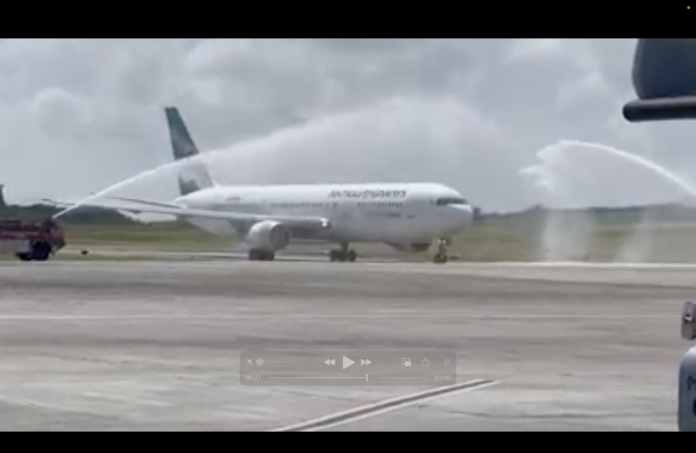 Antigua Airways is preparing to operate its first commercial air service between Nigeria and Antigua and Barbuda. According to the company, its inaugural flight will take off today from Murtala Muhammed International Airport (LOS) in Lagos and land tomorrow, the Caribbean country’s Independence Day, at V. C. Bird International Airport (ANU), which serves the capital city, Saint John.

The flight will be operated by the Boeing 767-300ER with manufacturer’s serial number (MSN) 33048 and registration CS-TSU. The aircraft is owned by EuroAtlantic Airways, a Lisbon-based company specialising in the marketing of charter flights and the provision of ACMI services (leasing of aircraft, crew, maintenance and insurance) for other operators. It has an interior configuration of 16 seats in Business Class and 251 seats in Economy.

The aircraft made its maiden flight in October 2002. From December that year and until April 2018, it operated for Hainan Airlines. It was then taken over by EuroAtlantic Airways.

Controversy over the launch of Antigua Airways

Last July, Antigua and Barbuda had announced the creation of a new airline based in the country. According to the national government, the new company would be financed by «an unidentified group of wealthy African investors» interested in opening up new air routes and trade opportunities between Africa and the Caribbean.

Gaston Browne, Antigua and Barbuda’s prime minister, had confirmed the signing of the first agreements with Nigerian investors. He was optimistic that the airline would begin operations later this year. Other officials also highlighted the opportunities for growth and expansion that Antigua Airways could bring to the country.

However, the first controversies arose from that very moment in the public debate. Opposition party leaders called the promise «illusory». They pointed to Air Peace’s unrealised plans to establish direct flights between Nigeria and Antigua and Barbuda as an example.

In early October, Browne announced that Antigua Airways would be partially capitalised with funds from the state’s Citizenship by Investment Programme (CIP), which grants Antiguan citizenship to foreign investors who contribute significantly to the country’s socio-economic development.

In addition, he said his administration would seek a commercial agreement with Antigua and Barbuda-based airline LIAT to boost air connectivity. The company, which offers scheduled inter-island air services in the Caribbean, is facing liquidity problems and is undergoing a rescue process.

According to the government, Marvelous Mike Press Ltd. would be the main investor in the new airline. Asked about the company’s previous experience in the airline industry, the prime minister remarked that it would lease an aircraft with crew.

In fact, the government of Antigua and Barbuda highlights that model of operation in defending the decision to allow Antigua Airways to offer flights from West Africa. The administration stresses that only the necessary financial resources are required to hire the aircraft and the necessary staff to operate. EuroAtlantic Airways will be the provider of that service.