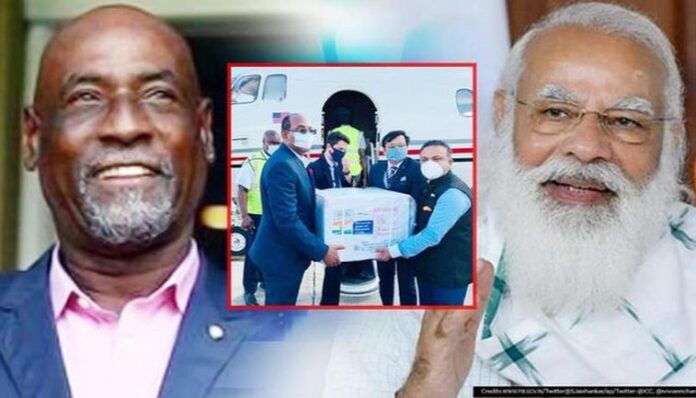 “We thank you so much to India and Prime Minister Modi on behalf of Antigua and Barbuda for this contribution and we look forward in future for the continued relationship,” former West Indies cricket team captain Vivian Richards said.

“We are extremely grateful to you (PM Modi) and your country for providing AstraZeneca vaccines,” Richie Rich said.

Indian High Commissioner to Guyana KJ Srinivasa told Asianet Newsable, “India’s reputation as the first responder to crises across the world — with its first-class healthcare capacities and as ‘pharmacy of the world’ has been reinforced with this donation of vaccines.”

“Our relationship with the CARICOM countries has been further strengthened and the gratitude expressed by the various Heads of State and governments in the region has shown their tremendous gratitude towards  India especially to PM Narendra Modi which will help us forge strong bonds in the future,” he said.

Earlier, Antigua and Barbuda Prime Minister Gaston Browne thanked India for providing over 500 thousand ‘Made in India’ COVISHIELD vaccines to the nation.

As part of its ‘neighbourhood first’ policy, India shipped millions of doses of the vaccines as grants to friendly to SAARC member nations while as part of its ‘Vaccine Maitri’ initiative, it has also sent to friendly nations like Brazil, Ghana and several other nations in the Caribbean and the Middle East.

India had announced a humanitarian donation of 5.7 lakh doses of vaccines for the Caribbean Region.

On March 1, India delivered a total of 1.75 lakh doses of the Oxford-Astrazeneca Covid vaccine to Caribbean nations, including — Antigua and Barbuda, St Kitts and Nevis, St Lucia, St Vincent and Grenadines and Suriname.

Initiated supplying the vaccines on January 20 to neighbouring countries, India has so far sent over 5.85 crore doses of vaccine to 70 countries.

As per the External Affairs ministry, more than 3.39 crore vaccine doses were dispatched to 15 different countries on a commercial basis.

Serpent worries about more loans from China in light of Uganda...