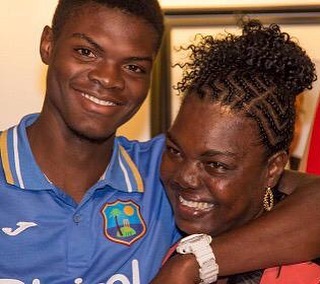 West Indies’ resounding 10-wicket victory over England yesterday that helped them claim the Wisden Trophy has been dedicated to Alzarri Joseph’s mother.

Sharon Joseph passed away before the start of play on Saturday.

Despite his loss, the 22-year-old fast bowler still took the crease during the West Indies first innings, making seven as the hosts were dismissed for 306.

He then returned to grab two wickets in England’s second innings as the Windies recorded a historic victory.

After the win, West Indies’ captain Jason Holder said the team had played to honour their teammate’s mother.

“Alzarri was exceptional. It took a lot of heart for him to be on the field today, I think a lot of people wouldn’t have been able to, but credit to him. The way he ran in this afternoon was exceptional and with a bit more luck he could have got three or four more wickets and could have put in a Man-of-the-Match performance.

“I just want to say condolences to him and his family, it is a tough loss. I came here two or three years ago and visited his mum, she wasn’t doing well at that stage but fought through, so I felt it personally this morning when I got the news that she had passed away,” Holder said.

The skipper said when the team heard the news, everyone rallied around Alzarri and offered their support.

He also lauded the young fast bowler for his spectacular effort under tough circumstances.

“To see him in tears this morning was even harder, and we came together in the huddle and we just wanted to do it for him and we dedicate this day to him, his mum and his family. It was up to him if he played. I didn’t want to deprive him of the opportunity to take the field.

“If he felt he could manage and take the field and perform then I wasn’t going to deprive him of that. For sure I knew he wanted to do something special for his mum and credit to him, he held his hand up high and did an exceptional job for us,” Holder said.