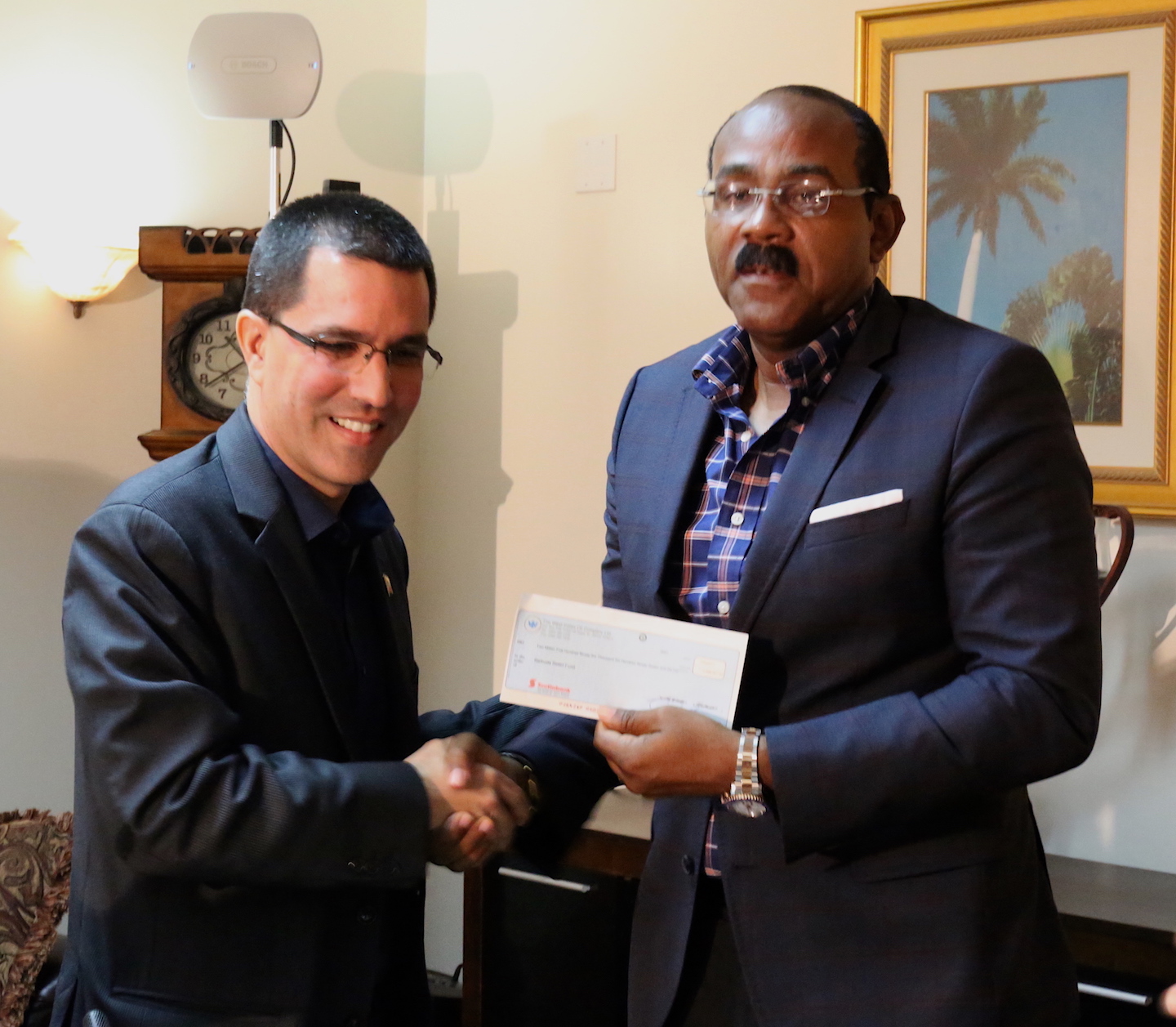 Foreign Affairs Minister of the Bolivarian Republic of Venezuela, Jorge Arreaza Montserrat on Friday evening, flew into Antigua and handed over to Prime Minister Gaston Browne a contribution of US$1 million to the Barbuda Hurricane Relief fund.

“The profit from the West Indies Oil Company partnership, that is doing very well, we are pleased to make our share available for the redevelopment of Barbuda.  Kindly accept the best regards from President Nicholas Maduro, who was very eager for me to travel to Antigua and Barbuda,” remarked Minister Arreaza Montserrat when presenting the cheque.

He said that President Maduro wanted him to travel to Antigua to get first-hand information of what had occurred in Barbuda and what will be needed to rebuild the island.

“In our revolution training of solidarity, we are taught to be the first to assist and to show solidarity.  Prime Minister Browne, you are a leader who has demonstrated dedication and made preventative actions to save people’s lives.  You can count on Venezuela in any situation – good or bad.  We are brothers and sisters – stronger than friends,” said the Venezuelan Foreign Minister.

Prime Minister Browne praised the Venezuelan government for being Antigua and Barbuda’s closest ally during a time of crisis.  He noted that President Nicholas Maduro was in contact with him even before Hurricane Irma made landfall.

“Venezuela was in full support of Antigua and Barbuda and the President advised us that whatever was needed, Venezuela was ready to provide.  A commitment was given of two military aircraft which aided in evacuating the people of Barbuda.  If it was not for the aircraft we would not have evacuated the people on time with a storm pending,” outlined Prime Minister Browne.

“The first call of any leader came from President Nicholas Maduro.  For that I am eternally grateful and he expressed solidarity with Antigua and Babruda.  We are eternally grateful for this demonstration of friendship and solidarity.  The first set of relief supplies also came from Venezuela.  Antigua and Barbuda will never forget this act of gratitude.  We will remain close allies of Venezuela forever.  It is times like these you know whom your true friends are,” remarked the country’s leader.

“This is a significant contribution.  There are many countries globally that have not made one tenth of this contribution to date.  This we hope will serve as an impetus for other countries, wealthier countries, to assist Antigua and Barbuda, particularly Barbuda in this time of crisis,” said PM Browne.

The Government of the Bolivarian Republic of Venezuela has also pledged a further US$2 million towards the Barbuda relief effort, making that country the largest single contributor to the fund to date.