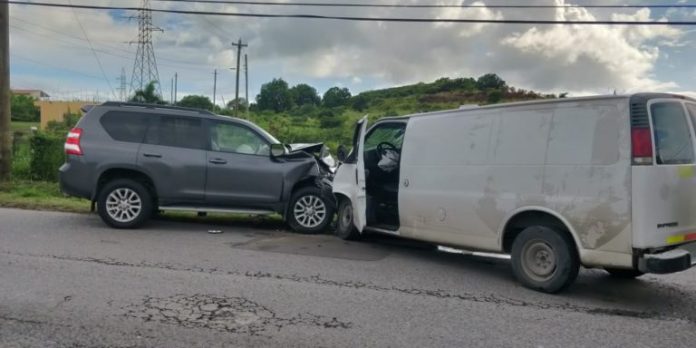 Two vehicles were involved in a head on collision on All Saints Road, in the vicinity of Europa.The drivers and passenger narrowly escaped with their lives.

The dark grey Toyota Prado, A 811, was said to be heading west, while the white Chevy Express C16727 was heading east.

It is alleged that the driver of the Chevy swerved into the lane of the Toyota Prado after he lost control of the vehicle during a maneuver to avoid a pothole.

The driver of the Chevy Express, who was visibly in pain, is believed to have suffered a dislocated ankle and injuries to the right knee and side, while the passenger sustained several lacerations to the head.

Both were rushed to hospital in an ambulance.

The driver and passenger of the Toyota Prado did not have any visible injuries. They were taken to the hospital for further examination in a private vehicle.