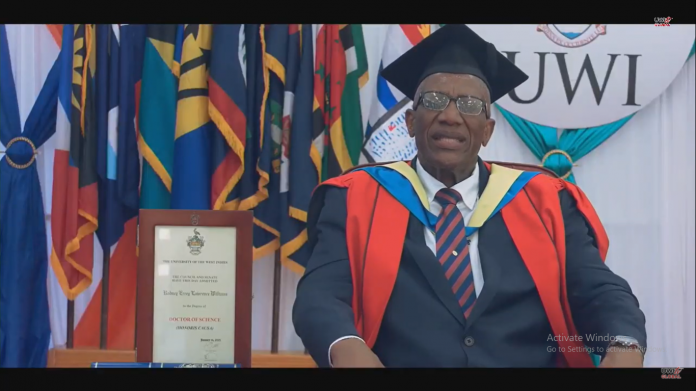 The event was shared with the general public through UWI TV and via social media. In Antigua and Barbuda, His Excellency Sir Rodney Williams, along with family members and the Honourable Prime Minister Gaston Browne, participated in the ceremony from a location at the UWI Five Islands Campus.

His Excellency Sir Rodney Williams is one of four honorary graduates to be conferred with the Doctor of Science (D.Sc.) degree by the University Council, for his outstanding contribution in the areas of Medicine and Public Service. The other recipients are: The Rt. Excellent and Rt. Hon. Sir Kennedy Simmons, St. Kitts and Nevis; Professor E. Albert Reece, Jamaica and Professor Edgar Julian Duncan, Trinidad and Tobago.

The son of a career politician, the late Honourable Ernest Emmanuel Williams, Sir Rodney followed in his father’s footsteps and served as a Member of Parliament in Antigua and Barbuda.  He was appointed as Minister of Government in various ministries, holding the portfolios of Tourism, Education, Culture, Technology, Economic Development, Environment, Sports, Youth and Community Development over a twenty-year period. He also served as Deputy Speaker of the House of Representatives and as Advisor to the Prime Minister.

In addition to his political career, Sir Rodney committed his life’s work to service in the medical field. He was a District Medical Officer for several years, lectured pro bono to nurses at the Holberton Hospital,  supervised the first batch of nurse practitioners in Antigua and Barbuda, and provided medical services in Codrington, Barbuda. Sir Rodney gave lectures on exercise, fitness and health for a number of years on local television and radio, and wrote articles on this topic.

After graduating with a Bachelor of Medicine, Bachelor of Surgery (MBBS) in 1976, Sir Rodney spent four decades of his professional life as a medical doctor in Family Medicine with specialisation in Aviation and Sport Medicine. From 1979 to present he has represented Antigua and Barbuda in a medical capacity in several high-level  sporting events and conferences including CARIFTA, IAAF, Pan Am and the Olympic Games. He held the post of President of the National Olympic Committee for four years.

In 2014, Sir Rodney Williams was appointed Governor General of Antigua and Barbuda. In the same year he was honoured with two knighthood appointments by Her Majesty the Queen – Knight Grand Cross of St. Michael and St. George and Knight of the Most Venerable Order of the Hospital of St. John of Jerusalem. In 2019, he was given the Freedom to the City of London.

Sir Rodney was named Patron of the Commonwealth Heritage Forum (UK)  and Trustee of the London-based West India Committee in 2020. He has also been a Patron of UWI’s Global Giving programme since its inception and named the most outstanding Patron for 2020. Additionally, he was the recipient of the University of the West Indies Alumni Association’s prestigious Pelican Award in that same year. Together with his wife, HE Lady Williams, Sir Rodney is Patron of more than 30 non-profit organisations.

In his acceptance speech and charge to the 2020 graduating class, Sir Rodney expressed appreciation to UWI for the institution’s recognition of his contribution to society, and congratulated his fellow honorary gradates on their achievements. He proceeded to impart practical advice to the UWI students, emphasizing that “multi-skill development is a necessity in today’s complex social and economic environment.”

Sir Rodney Williams received another honorary doctorate from the St. Mary’s College of Maryland, USA (2019) for national service and a Professorship from the Kazakh-Russian Medical University and the Government of Kazakhstan (2019) for his work in Sports Medicine.