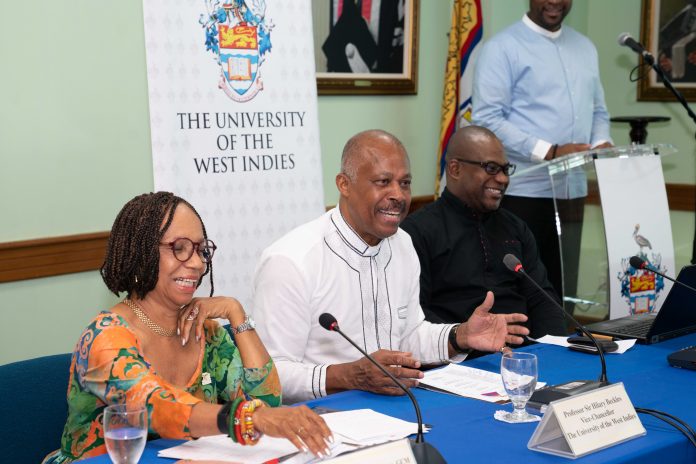 As universities globally grapple with funding challenges precipitated by sharp falls in government funding and a decline in enrolment, The University of the West Indies (The UWI) convened a landmark meeting on Wednesday, Oct. 14.

As part of the emergency investment in the Caribbean region is a proposal by the Vice-Chancellor of The UWI, Professor Sir Hilary Beckles, to establish a US$600 million multi-donor trust fund to prevent systemic decline in the region’s higher education and research sector.

Vice-Chancellor Beckles issued his call to action during his presentation on the topic “Fixing the Broken Links: Crisis in higher education, research, international competitiveness and inclusive economic development”.

He emphasized that the Caribbean region has been woefully underfunded for education and development projects since independence, in spite of centuries of wealth extraction by developed countries.

As a result, the contemporary higher education sector is unfit for purpose with systemic challenges that need to be addressed at all education levels.

In spite of over seven decades of government support for education and The UWI’s dedicated efforts, which have led to the regional university’s ranking among the top four per cent of universities globally by Times Higher Education, the current constraints of the highly-indebted Caribbean countries and the projected economic contraction of close to eight per cent in 2020, now pose an existential threat to the higher education sector in the Caribbean, unless a fund to support human capital development is urgently established.

Vice-Chancellor Beckles, who is also the President of Universities Caribbean, a consortium of universities located in the English, Spanish, French and Dutch-speaking Caribbean, did not mince words as he addressed the virtual audience of over 100 participants, including Prime Ministers, Ministers of Education, Ministers of Finance, other government officials, diplomatic missions and representatives from United Nations agencies and development banks.

He stressed the severity of these challenges, which come at a time when countries need to draw on research and innovation to build knowledge economies and propel the region’s economic diversification agenda.

Sir Hilary explained that the Caribbean’s vulnerability to climate change, chronic diseases and exogenous shocks is being exacerbated as a result of the COVID-19 pandemic and that the resulting funding crisis for higher education and research is a burning issue that must be red flagged as part of the region’s emergency response to the pandemic.

He thanked the governments for trying their very best to support the regional university in spite of the severe impact on the region’s GDP and also expressed his gratitude to ECLAC for facilitating this important conversation.

Vice-Chancellor Beckles called upon the private sector to invest in research, development and innovation projects that could help boost economic diversification and international competitiveness.

He also urged development partners to help mobilize resources for the multi-donor trust fund for human capital development in the Caribbean, challenging them to an initial capitalization level of US$600 million.

This fund will make it possible to undertake urgent regional projects that would provide widespread access to higher education, advance path-breaking research and innovation, promote much-needed digital transformation, develop technical and vocational skills to support a range of industries and undertake education reform and policy harmonization from early childhood through to university.