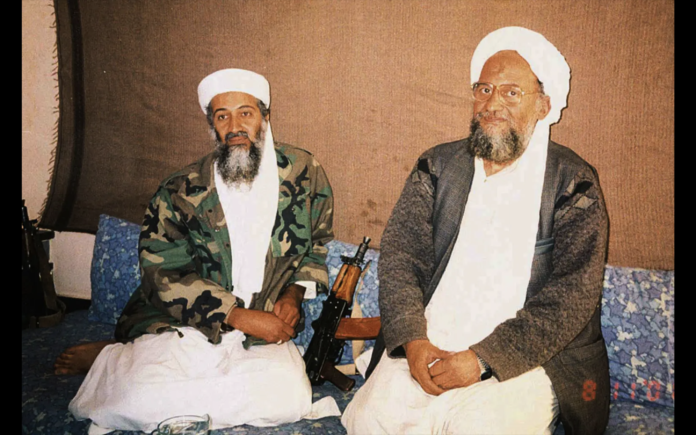 Al Qaeda leader Ayman al-Zawahiri was killed while standing on the balcony of his safe house in Afghanistan when a CIA drone sent two Hellfire missiles to pulverize the terror leader and plotter of the 9/11 terror attacks.

The precision strike took place in the heart of downtown Kabul during the early hours Saturday, ending a 21-year manhunt for Osama bin Laden’s successor and marking the most significant US counterterror operation since the 2019 slaying of ISIS commander Abu Bakr al-Baghdadi.

The terror leader had stepped onto his balcony in the Shirpur neighborhood of Kabul when the US drone fired two specially designed RX9 Hellfire missiles dubbed “sword bombs” due to the blades that allow the weapon to tear through metal and walls without destroying entire structures.

President Biden confirmed al-Zawahiri’s death during an evening address in which he declared, “Justice has been delivered and this terrorist leader is no more.”

“Now we make it clear again tonight, that no matter how long it takes, no matter where you hide: If you are a threat to our people, the United States will find you and take you out,” Biden said.

Biden said of al-Zawahiri, “For decades, he was the mastermind behind the attacks against Americans, including the bombing of the USS Cole in 2000, which killed 17 American sailors and wounded dozens more.”

“He played a key role, a key role in the bombing of US embassies in Kenya and Tanzania, killing 224 and wounding over 4,500 others. He carved a trail of murder and violence against American citizens, American service members, American diplomats and American interests.”

None of al-Zawahiri’s family members were hurt and there were no civilian casualties, the president said, calling the mission to eliminate the terrorist leader a “total success.”

Biden’s remarks from the Blue Room balcony of the White House were reminiscent of President Barack Obama’s late-night announcement of the death of bin Laden in Pakistan more than 11 years ago.

“He had moved to downtown Kabul to reunite with members of his immediate family. After carefully considering the clear and convincing evidence of his location, I authorized a precision strike to remove him from the battlefield once and for all.

“This mission was carefully planned and rigorously to minimize the risk of harm to other civilians. And one week ago, after being advised the conditions were optimal, I gave the final approval to go get him.”

Biden added: “We will never again, never again allow Afghanistan to become a terrorist safe haven because he is gone. And we’re going to make sure that nothing else happens.”

“You know, it can’t be a launching pad against the United States. We’re gonna see to it that won’t happen,” he said.

“This operation is a clear demonstration that we will, we can and will always make good on that solid, solid pledge.

Fox News, citing two intelligence sources, first reported on the death of the Egyptian-born surgeon who took over the terrorist group behind the Sept. 11 attacks after bin Laden was killed by Navy SEAL Team 6 in 2011.

Al-Zawahiri had a $25 million bounty on his head over his indictment in the 1998 embassy bombings.

He’s also believed to have helped coordinate the atrocities that killed nearly 3,000 people in New York, Washington and Shanksville, Pa., 21 years ago, which were masterminded by bin Laden and planned by Khalid Sheikh Mohammed, who was captured in Pakistan in 2003 and is being held at Guantanamo Bay, Cuba, pending trial by a military tribunal.

Current and former officials began hearing Sunday afternoon that he’d been killed in a drone strike, sources told the Associated Press, but the administration delayed releasing the information until his death could be confirmed.

Taliban spokesman Zabihullah Mujahid confirmed in a statement on Twitter Monday that a drone strike on a home in Kabul had taken place the day before.

The house was owned by a top aide to senior Taliban leader Sirajuddin Haqqani, a senior intelligence official told AP, raising questions about whether al-Zawahiri had received sanctuary from the Islamist group following the botched US withdrawal from Afghanistan last year.

The official added that a CIA ground team and aerial reconnaissance conducted after the drone strike confirmed al-Zawahiri’s death.

“We have identified a concerted effort to restrict access to the safe house in the surrounding area for hours after the strike,” the official said.

“The safe house used by Zawahiri is now empty.”

The Taliban spokesman said, “The Islamic Emirate of Afghanistan strongly condemns this attack on any pretext and calls it a clear violation of international principles and the Doha Agreement.

“Such actions are a repetition of the failed experiences of the past 20 years and are against the interests of the United States of America, Afghanistan and the region,” Zabihullah wrote.

“Repeating such actions will damage the available opportunities.”

Al-Zawahiri and bin Laden are believed to have met in the late 1980s, when al-Zawahiri reportedly treated the Saudi millionaire in the caves of Afghanistan as Soviet bombardments shook the mountains around them.

Al-Zawahiri merged his group of Egyptian militants with bin Laden’s al Qaeda in the 1990s, and photos from that period often showed the two men sitting side by side.

Bin Laden provided al Qaeda with charisma and money, but al-Zawahiri brought tactics and organizational skills needed to forge militants into a network of cells in countries around the world.

“The strong contingent of Egyptians [in al Qaeda] applied organizational know-how, financial expertise, and military experience to wage a violent jihad against leaders whom the fighters considered to be un-Islamic and their patrons, especially the United States,” Steven A. Cook wrote for the Council on Foreign Relations last year.

There have been rumors of al-Zawahiri’s death for several years, but a video that surfaced in April showed him praising an Indian Muslim woman who had defied a ban on wearing a hijab, or headscarf.

That footage was the first proof in months that he was still alive.

As with bin Laden, al-Zawahiri’s whereabouts had been unknown before the operation that led to his death, though the most common rumors placed him either in Afghanistan or in Pakistan’s near-lawless tribal areas near the Afghan border.