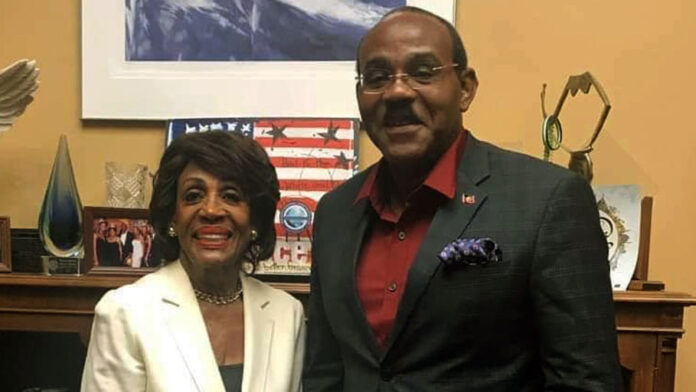 Prime Minister, Gaston Browne, as the lead on Financial Services in the quasi-Cabinet of CARICOM Heads of Government, has thanked the Chair of the Banking Committee of the US House of Representatives, Maxine Waters, for the inclusion in US law of helpful guidelines on de-risking.

For several years, regulatory directives to US global banks have resulted in the withdrawal of correspondent banking relations to Caribbean banks.  The loss of these relations threatened to cut-off Caribbean countries from the global financial and trading system, including family remittances, foreign investment and payment for the import and export of goods and services.

The US Congress has now adopted a law in which new directives on de-risking have been included.   The law is the ‘‘William M. (Mac) Thornberry National Defense Authorization Act for Fiscal Year 2021’’ (NDAA).

Section 6215 of the NDAA, which deals with Financial Services De-Risking, is the result of work by the Prime Minister of Antigua and Barbuda, Gaston Browne, and his diplomatic team in Washington DC, led by Ambassador Sir Ronald Sanders.

That work culminated in a US Congressional Round Table in November 2019, chaired by Congresswoman Waters, which gathered representatives of major US banks and a high-level Ministerial team from the Caribbean, led by Prime Minister Browne.

One of the major results of the Round Table was the Banking Committee’s decision to codify guidelines on de-risking in US law.

Among the matters that the guidelines set out are that “providing vital humanitarian and development assistance and  protecting the integrity of the international financial system are complementary goals; and access issues are a concern for individuals and entities such as those sending remittances from the United States to their families overseas and certain domestic and overseas jurisdictions that have experienced curtailed access to cross-border financial services due, in part, to de-risking”.

One of the law’s fundamental directives is that “policies that encourage financial inclusion must remain a priority”.

Ambassador Sanders informed Congresswoman Waters that Prime Minister Browne expressed his gratitude on behalf of Caribbean states, saying: “We know that while this is a first step, it has created a pathway, within U.S. law, to advance reasoned discussions on the harmful effects of de-risking on cooperative jurisdictions”.