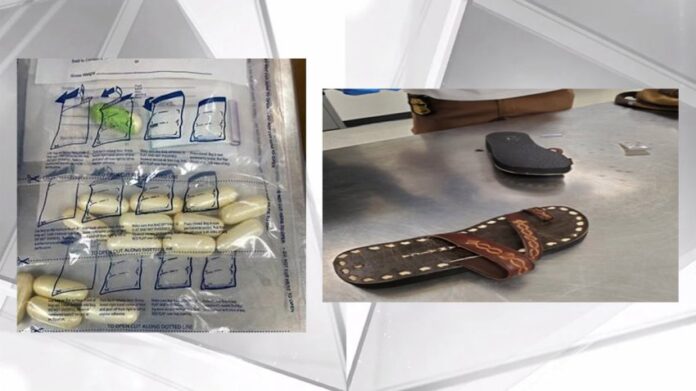 The United States Customs and Border Protection (CBP) agency says that officers at Miami International Airport apprehended a Jamaican smuggler with cocaine in a pair of sandals and in the smuggler’s body.

“During a baggage inspection, CBP officers discovered a white powdery substance and a tiny drug balloon, or pellet, concealed within a pair of sandals,” said CBP, stating that the items weighed about 1.3 pounds and were “field-tested positive for cocaine”.

“Upon questioning, the Jamaican traveller admitted to swallowing cocaine and was taken to a local hospital for an X-ray examination,” CBP added. “The X-ray showed the presence of foreign objects, and the individual later passed 28 pellets testing positive for cocaine.”

“It’s important to deter this type of illegal activity which can be fatal if a pellet bursts,” he said.

“This is latest example of dedicated CBP officers using training and expertise to interdict illegal narcotics,” said Miami/Tampa Field Office Director of Field Operations Vernon T Foret. “Smugglers looking to bring in illicit drugs will be caught no matter what the concealment method is.”

It said border security mission is led at ports of entry by CBP officers from the Office of Field Operations.