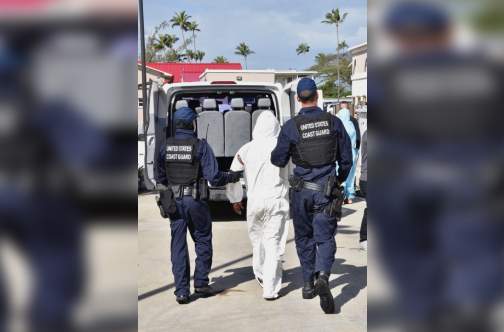 The United States Coast Guard says its cutter Heriberto Hernandez transferred custody of three suspected smugglers and US$5.6 million in seized cocaine to US federal agents at Coast Guard Base San Juan following the interdiction of a drug smuggling vessel in the Caribbean Sea off St Croix, US Virgin Islands.

The US Coast Guard said earlier this week that the suspected smugglers are three males, one Venezuelan and two Dominican Republic nationals, who now face criminal charges by US Department of Justice prosecution partners in the US Attorney’s Office for the District of Puerto Rico.

“This interdiction was the result of great teamwork from beginning to end with our interagency partners.” said Lt Peter Kelly, US Coast Guard Cutter Richard Dixon commanding officer.

“I am extremely proud of the execution of the Richard Dixon crew in what was not an easy mission, and we are pleased to have kept such a large amount of cocaine from reaching US streets,” he added.

The US Coast Guard said the bust occurred during the afternoon of February 23, after the aircrew of a US Customs and Border Protection Caribbean Air and Marine Branch maritime patrol aircraft detected a suspicious go-fast vessel southeast of St Croix.

The US Coast Guard said the Coast Guard Cutter Richard Dixon diverted to interdict the go-fast vessel with the assistance of the cutter’s small boat.

Following the interdiction, the Cutter Richard Dixon’s boarding team located and seized over 200 kilogrammes of cocaine, the US Coast Guard said.

It said the crew of the Cutter Richard Dixon “embarked the three men and seized contraband from the go-fast vessel, and later transferred them aboard the Coast Guard Cutter Heriberto Hernandez for transport and offload in San Juan, Puerto Rico, where CCSF federal agents received custody”.

The US Coast Guard said the CCSF is a multi-agency organised crime drug enforcement task force group operating in the District of Puerto Rico, “focusing on Caribbean and South American-based transnational criminal organisations involved in the maritime and air smuggling shipments of narcotics from Puerto Rico to the Continental US and in the laundering of drug proceeds using bulk cash smuggling and sophisticated laundering activities”.